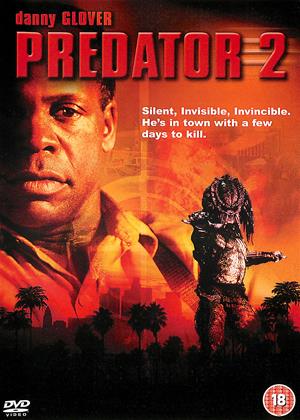 Predator 2 is the successor to none other than John Mctiernan’s action/adventure masterpiece ‘Predator’, which followed a group of highly skilled commandos that got more than what they bargained for (somewhere in the South American jungles). This time however, the directorial baton hops over to Stephen Hopkins and, unfortunately, this sequel doesn’t quite live up to the expectations despite a creative script, a bunch of talented actors, awesome set-pieces and lightning, and a terrific music and sound design.

With that being said, Predator 2 is not a bad film, but the absence of McTiernan is palpable enough to make audiences ponder: how the hell did this work the first time so well? And why it isn’t working now?

The film starts off in the spirit of the first Predator, showing a seemingly disparate event that involves gang bloodshed, shootouts, and a high-risk situation with Lieutenant Mike Harrigan (excellently played by Danny Glover) as the frontman of the show. As such, Danny does an excellent job of portraying an urban righteous man stuck in a decadent society where bullets speak louder than words. Meanwhile, this urban setting is full with reverse-archetype of mystics and wise men, and I’m mostly referring to characters from the likes of King Willie and El Scorpio (played by Calvin Lockhart and Henry Kingi respectively). These mystics guide Lieutenant Mike Harrigan through a seemingly unsolvable puzzle where the odds are always against him; his colleagues Danny Archuleta and Leona Cantrell are just obstacles in Mike’s way, (played by Rubén Blades and Maria Conchita Alonso) which he must overcome in order to face the greatest evil of them all – a highly-powerful extraterrestrial hunter whose only thirst is that for spilled human blood (and the occasional spine).

And yet, despite all of that, there is something that’s missing in Predator 2, namely the sense of urgency, the pulse of mystery, and the excellent geography mostly owed to the meticulous camera work and editing under John McTiernan’s watchful eye.

Predator 2 is not a classic, but far from it; it’s a very creative idea that doesn’t fully realize its potential (a skilled alien warrior in the midst of gang warfare in a decadent New York City is out and about to collect his dues), faltering in several key areas which make a film special: editing, camera work, inner-film geography, and a tension which is severely lacking. Stephen Hopkins does a good job, but not quite on par as his predecessor, as this is evident throughout multiple scenes of the film as stated above.

Despite all of that being said, Predator 2 is still better than the most so-called “action” flick produced nowadays (2018), and as such it’s worth at least one thorough watch.

Oh, and watch out for the ending.