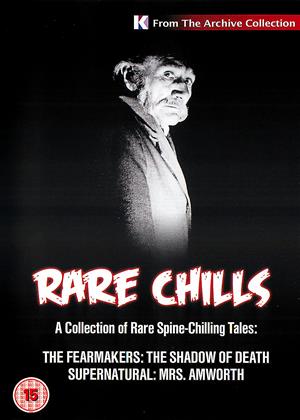 Synopsis:
Do you wake at night, hearing sounds under the floorboards? Are ghosts real? Or figments of your imagination? Are you brave enough to walk through a graveyard at night? Two chilling tales of terror to keep you awake at night:

Filmed in what looks to be the hot summer of 1976 and based upon a decades-old story by E.F. Benson, Mrs Amworth opens with the eponymous Glynis Johns at the wheel of an open-top motor-car as she causes many a collision for which she cannot be directly blamed as she arrives in a village dominated by its church and graveyard.

With a script by Hugh Whitemore, it proves to be all the more topical, for the villagers are going down with a virus which drains them of their energy. Is indeed wildlife to blame? Why do some refuse to have a necessary blood test? Are those who blame it upon gnat bites on the right track?

Made for television, this half-hour yarn has a fair amount of its garish period colour (and appalling taste in men's clothes). And yet, with a bravura performance by Glynis Johns, who appears to have stepped - breast-clinging dresses and all - more from Tennessee Williams than Benson's Mapp and Lucia, it is well worth one's time, as much for the crowded bar-be-que as solitary graveside moments which traverse the centuries.

We need more films made from Benson's supernatural tales (meanwhile be sure not to miss the post-war Dead of Night, part of which derives from him).

The second part of this short two-film disc, Mrs Amworth is the better bet.