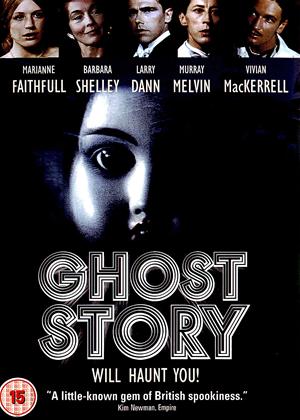 Don't mind if I do. - Ghost Story review by Steve Mason

A film of such soporific aimlessness and self indulgence that it could only have been made by a stoned six former. A small cast of poshos in boating shoes, cream slacks and pretty frocks wander around a nice old house, occasionally visited by visions of a Victorian doll.

I would say it shows no signs of talent at any level, if only because it doesn't. (The director did make the distinctly ok, I Monster.) Though someone clearly has an interesting dressing up box. A cult classic for some. For others, a bewildering waste of time.

Supercilious Duller, prissy McFayden, ever-enthusiastic Talbot (Vivian MacKerrell, Murray Melvin and Larry Dann) are three ex-college friends who meet up after four years for a reunion in MacFayden’s sprawling country house. One gets the impression the three were rather associates by necessity rather than bosom buddies, as their waspish glances and sneering comments – usually directed at poor, silly Talbot – would attest. Such needling among them seems deliberately provocative, with McFayden giggling, “He’ll go mad,” as Talbot makes his way to bed on the first night.

As the most sensitive, it is Talbot who is afflicted by a strange haunting. Dolls seem to come to life, and imagery of the house’s former residents Sophie (MacFayden’s cousin, as it turns out) and Mrs Rennie (Marianne Faithful and Penelope Keith). Sophie is being persuaded she is losing her mind thanks to Robert (Leigh Lawson), which in turns informs Talbot’s further visions of an austere insane asylum. The reasons Robert wishes to do away with his sister in such a way is because he finds that he ‘fancies her’.

The performances are very theatrical, slightly larger than life (Melvin is a theatre veteran and specialises in fragile, effete characters, whereas MacKerrell was a notable eccentric in real-life: the subject of the film ‘Withnail and I’) and the substituting of Bangalore Palace in India, where this was filmed, for creepy 1920’s England in the height of summer adds to the not-quite-rightness of the overall atmosphere. Talbot is being invited to witness events, but is given no clue as how to rectify them (it is his inability to help that ultimately brings about his death via some non-special effects). The sweaty, spacious visuals are very effective, as are the scenes in the asylum when the inmates finally break-out and subject their doctor Borden (Anthony Bate) to an excruciating, lengthy wet shave.

Irritated to a point beyond even his usual unpleasantness, Duller leaves – his temper no doubt fuelled by his own inability to communicate with the spirits that are clearly drawn instead to Talbot. The depiction of the house he leaves behind is extremely creepy, and it is almost possible to sympathise with the waspish McFayden – suddenly the victim of Talbot’s wayward behaviour now he is left alone with him – for not wanting to stay there alone. This unease is exemplified by Ron Geesin’s eerily out-of-place music. The film is an unsettling oddity, and directed by Stephen Weeks who also directed the Christopher Lee film ‘I, Monster (1970)’ at the age of only 22.

Better than I was expecting - Ghost Story review by PD

I'm a big fan of a Withnail and I chose this film mainly to see the actor Vivian MacKerrel in one of his few screen roles. MacKerrel is reputed to have been the model for the drug and alcohol riddled character Withnail.

I was expecting both McKerrel and the film to be terrible but actually it was all quite fun. Intentionally or not the film borders on parody and the interactions between the three posh chums were a delight to watch. If you are looking for a serious art film or a even genuinely scary movie you will be sorely disappointed, but as a piece of entertaining 1970s esoterica it fits the bill just fine.