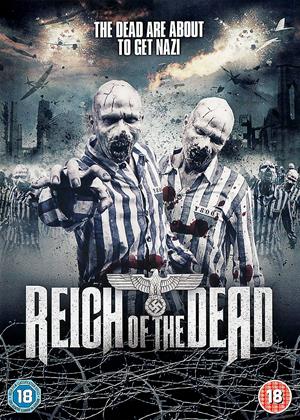 Reviews (1) of Reich of the Dead

Spoilers ... - Reich of the Dead review by NP

Watching this film is a frustrating experience; it’s a mixed bag. Powerful moments, direction, location, nicely restrained CGI effects and pacing are punctuated with some wooden acting (Aaron Stielstra as Sergeant Calhoun and Ally McLelland as Matt) and some dreadful dialogue. We are witnessing hard-bitten soldiers trapped in an unforgiving environment facing, as the title suggests, the living dead – so naturally every sentence should be comprised of macho cliché and relentless expletives so out of context, the profanities are unintentionally quite funny. As a result, we spend a lot of time with people it is impossible to like. We can’t even long for their deaths, because their stilted delivery doesn’t provide us with any personality.

Only Andrew Mills as Will lends his role any pathos, sense of fear or even, dare I suggest, personality. That is why, in the scenes toward the end, when he is all but alone against the modest hordes of zombies, does the tension improve greatly. Luckily, the end credits supply us with character pictures to go with the actors, because it is hard to work out otherwise, who is who.

To concentrate on the positives, the visuals are stunning. There is a bleak oppressive nature to the choice of location, and the soldiers’ sense of isolation and hopelessness is expertly conveyed. The film has a slightly grainy took to it, which enhances the punishing conditions – and by that token, the occasional flashbacks to Will’s sunny, carefree childhood, come across as tear-jerkingly wholesome and idyllic, which imbues the return to his present predicament with an even greater emotional impact.

The ending is an enigma. Will is guided by a young woman to the sprawling run-down hospital run by Doktor Mengele, who is responsible for the creation of the undead hordes (another lunatic striving towards the perfect solider motif). The woman turns out to have been an hallucination. And yet, the end would suggest she is the spirit of Will’s mother, which begs the question, why would she lead him to his doom – because that is exactly what Will’s fate turns out to be. On top of that, a final scene suffused in the closing credits seems to indicate Will’s entire experience has not been real at all, suggesting a ‘dream ending’ cop-out.

Zombies during war-time is a theme that has been visited several times (‘Frankenstein’s Army’, ‘Dead Snow’, ‘Dead Mine’ for example) and works rather well. With a little more effort made to give the leads personalities, this would have been so much more satisfying.