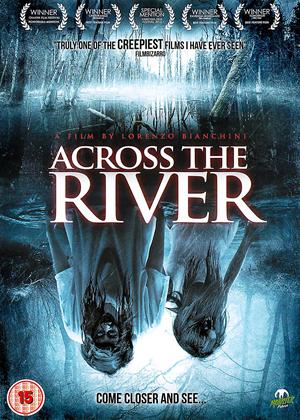 Synopsis:
With the tension ratcheted up to uncomfortable, nail-biting levels right from the very first frame, Lorenzo Bianchini's 'Across the River' is an atmospheric, supernatural nightmare that is guaranteed to creep out even the most jaded horror fan. When wildlife researcher Marco Contrada is working in a remote woods, his studies lead him to an abandoned village deep in the Italian countryside, where he becomes trapped due to flooding. His presence in the village unleashes a horrifying evil. This ancient curse would like nothing better than Marco's guts lying in a pool of blood at his feet... but only once it s had its terrifying fun.
Actors:
Renzo Gariup, Marco Marchese, Lidia Zabrieszach
Directors:
Lorenzo Bianchini
Producers:
Omar Soffici
Writers:
Lorenzo Bianchini, Michela Bianchini
Aka:
Oltre il guado
Studio:
Monster Pictures/Fusion
Genres:
Horror, Thrillers
Countries:
Italy, Horror, Thrillers

Reviews (4) of Across the River

Surprised. Pleasantly. - Across the River review by DM

A rare and atmospheric minimalist gem. Tense and intelligently made throughout, I would put this up with japanese horror at its best.

Spoilers ... - Across the River review by NP

There have been many films that have featured buildings haunted by previous residents, but very few with the slow deliberation and intensity of ‘Across the River’. The first time I watched this Italian film, I found myself losing interest and turning off some twenty minutes in. This second time, I was mesmerised throughout. Providing you are in the right mind-frame for a true ‘slow burner’, this is hugely effective – and, yes, very frightening.

When ecologist Marco Contrada (Marco Marchese) finds himself trapped in the ruined remains of a desolate village due to persistent flooding, he sees clothing floating across the river. At first, the clothing looks like offal. As his time trapped in the crumbling, decayed buildings becomes an endless succession of creaking doors, distant knocking and unearthly screeching from the densely wooded surroundings, Marco appears to become visibly older, clearly haunted by lack of sleep and the endless damp and leaking windows and roofs. The leaking, however, takes on an almost supernatural turn; it appears to be hunting him.

Yes, the pacing crawls. The scares are drip fed, but slowly become more intense, and ultimately, the flowing camera and squalid decomposition provide an immersive atmosphere – the camera lingers on every stained, ripped curtain, every mud-strewn pathway, every mildewed window-frame: you can almost taste the decay. The dialogue is scarce, and – much like a bigger budget – proves entirely unnecessary. This is haunting at its most effective.

Atmospheric - Across the River review by BY

At first, slow to start, but the tension and interest grows. When Marco is stranded in an old deserted village due to flooding, it is the start of a frightening series of hauntings for him. The desolution of the place appears to haunt him and he sinks into despair. Little dialogue, but very cleverly done to induce fear. Recommended.

Not much to add to the excellent reviews above. Except to emphasise that, as in the best of the Japanese horrors, genuine creepiness and evocation of evil does takes time (e.g. 45-50 minutes in the case of Audition - but it's time well spent, as you'll know if you saw it). So if you go for this one, be in the right mood for a long, slow buildup. Maybe switch the lights off too, and you really will experience the kind of hair-rising, skin-crawling terror rare in cinema today.