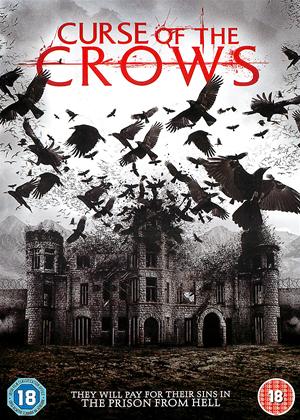 Reviews (2) of Curse of the Crows

Mild spoilers follow ... - Curse of the Crows review by NP

This intriguing supernatural horror hits the ground running from the opening moments and doesn’t let up until the final credits have finished rolling. In a lengthy pre-credit sequence, we are made familiar with the inmates of an unspecified gothic prison where a character called Skinny is being tortured by two perennial guards. The rules seem to be set for what is to come: people who have been brutally sinful in life are taken away and maimed and killed brutally. After we are introduced to the motley crew of prisoners – a new inmate arrives.

‘Princess’ is an intriguing, enigmatic character, played with brilliant intensity and sensuality by Tiffany Shepis. At times it seems she could be more than human, a saviour, or a witch. At one moment, she appears to have been killed, but after a period of self-healing, transcends death. Is she just another prisoner, or is she somehow in league with the Eastern European sadists who act as prison officers? Certainly they seem in awe of her, even afraid. Or is her position above them?

Each inmate’s former crimes are investigated in flashback, until ultimately, we (kind of) learn who (or what) Princess is, and what is her relationship to the blind Charlie (Gerry Shanahan). When they come, the explanations are ambiguous all round, to say the least.

I thoroughly enjoyed this. It has a compelling story to tell, and wastes no time in telling it. The direction is wonderfully creepy (cameras linger lovingly over rusted, dirty surroundings or fast-track across forbidding skies underlining the sense of bleakness). There are plenty of gory moments for those who enjoy such things, although a lot of the violence is there seemingly for the sake of it – the comically vile character of Spoon (Emanuele Cerman), for example, has little to do with the overall structure, but is no less enjoyable because of that. The ending, which threads its way through even the end titles, suggests that the narrative is ongoing and will continue as long as evil exists in humanity, which indicates the stark prison cells will never be empty. Such whirlwind pacing right up until the end does leave the viewer wondering exactly what they have just witnessed, but (for me at least) in an appreciative way, and a way that invites moments from the film to linger in the mind long afterwards.