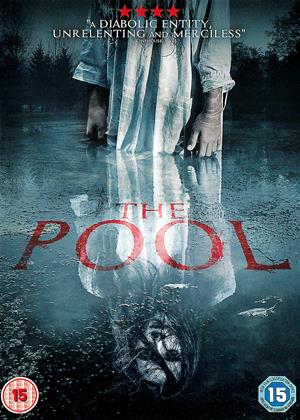 This Dutch horror film opens with one of the most sharply observed views of a family holiday I have seen. Leannart Lennaert (Gijs Scholten van Aschat, who also co-wrote the screenplay) takes his wife Sylke (Carine Crutzen), and two sons Jan (Alex Hendrickx) and Marco (Chris Peters) camping, along with friend Rob (Bart Klever) and his daughter Emilie (Jamie Grant). The teenage sons argue, flirt with Emilie, while the elder members become more and more exasperated, whilst revealing that Sylke is having an affair with Rob. The level of sarcasm between the characters is delightfully realistic, and Len is determined they all enjoy themselves, whether they like it or not! As is often the way in these films, no matter how many rotting animals are found, no matter how food supplies inexplicably become festooned with maggots or injuries are sustained, they refuse to leave immediately.

After suffering food poisoning, Rob dies in the night. However, we see a brief clip of Leannart strangling him and vomiting over his face, making it appear he choked to death in his sleep. The clip is so sparse, it isn’t immediately clear whether it actually happened, or was just another of the increasing amount of hallucinations prevalent. The hallucinations are caused by a shell found by Jan, but seems to possess Leannart, and causes them both to see images of a young woman. In another brief flashback, it appears the woman maybe the reincarnation of a witch, drowned in the pool many years ago.

At the end, on Jan and friend Emilie are the only ones left alive. When they try to leave, they only find themselves back at their campsite. Emilie falls to her knees in despair.

‘The Pool’ is a slow moving film which features some exceptional performances. It is difficult to know what is hallucinatory and what isn’t as events wear on, and the ending does nothing to make things clearer: Jan finds a motorway, seemingly freedom. When he turns to look at the girl behind him, it is the woman from the hallucinations.