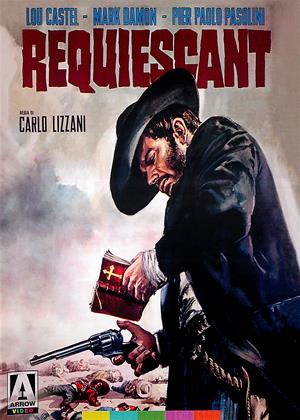 Just about every spaghetti western that isn't absolutely terrible has some claim to be a "cult movie", especially the odd ones. This is definitely a spaghetti western, it's undeniably odd, and Alex Cox (remember him?) thinks it deserves a cult following, so I suppose it must have one. The only problem is, it isn't very good.

Nothing ruins everybody's fun like too much politics, "correct" or not, and that's one of the main things wrong with this movie. For some reason a disproportionate number of Italians who directed westerns were passionate left-wingers, so a lot of films in this genre range from vaguely revolutionary to downright Marxist, but that's not a problem if the speeches don't get in the way of the action. Here, unfortunately, they do, in a bizarrely ham-fisted way. The bad guy, who is shown very convincingly indeed to be a spectacularly dreadful person before we even get as far as the opening credits, gives speeches of the "I am the poster boy for capitalism, therefore I wish they'd hurry up and invent Nazis so I could be one" variety every 20 minutes in case we haven't got the point yet, while the arthouse movie director Pier Paolo Pasolini, who definitely should have stayed on the other side of the camera, woodenly trots out the case for left-wingers being much better people even if they're much worse actors.

Stranded in the middle of this speechifying is the bewildered nitwit occupying the space where the hero should be. There are plenty of fine westerns, spaghetti and otherwise, in which a naïve young man has to transform himself into a ruthless avenger, but this poor schmuck is so naïve he actually seems brain-damaged. Which, since he doesn't even figure out who he's supposed to be avenging until three-quarters of the way through the film due to amnesia caused by a head-wound, he may in fact be. He wins gunfights, survives ambushes, and generally does everything a hero is meant to almost entirely thanks to coincidences so enormous that they're heavily implied to be literal acts of God, or the timely intervention of Mexican revolutionaries who keep claiming they need his help while proving themselves far better at solving their own problems than he is. All of which leads up to the most anticlimactic final showdown I've ever seen in a western, a gunfight so underwhelming that one of the other characters comments on it.

The whole film's a dreadful stylistic muddle, with odd lurches in tone from near-comedy to tub-thumping political tragedy as if they kept changing the script as they went along, made worse by the director's inability to give the action the split-second timing a proper spaghetti shootout needs. And why is the bad guy made up to look as though he's terminally ill when there's not one reference to his illness in the entire movie? Perhaps in an early draft he was a vampire, by way of an even clumsier critique of capitalism than the one they ended up with? Which would explain why in his last scene he's dressed as Dracula.

Makeup is also a problem for the hero, who is so heavily caked in greasepaint that he never looks quite normal. Why, of all the actors in Italy, did they cast the fair-skinned, blond-haired Lou Castel as a Mexican? You can see in the photo above that his blue eyes don't match the rest of him. Presumably it was on the strength of his performance the previous year as the baby-faced killer in "A Bullet For The General", a movie quite similar to this one but much better. So maybe you'd be better off renting that instead of this.