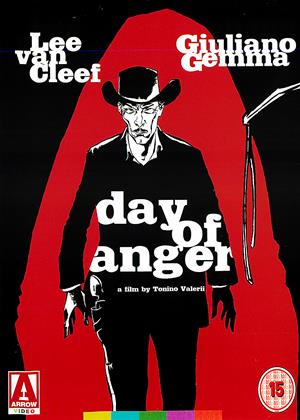 Reviews (1) of Day of Anger

The Good, The Bad, And The Undecided - Day of Anger review by Count Otto Black

When you mention spaghetti westerns, everybody thinks of a tiny handful of movies, usually the Dollars Trilogy, "Once Upon a Time in the West", and maybe "Django", though they're probably thinking more of the peculiar Tarantino remake than the cheap, unpretentious, gleefully blood-soaked original. But there are a huge number of lesser-known films in the genre, some of them well worth a couple of hours of your time. However, deciding which to bother with can be tricky, since a great many of them have approximately the same casts but vary enormously in quality. In particular, Lee Van Cleef was in so many that his name in the credits is no guarantee of a high standard, and some of his lesser outings are downright embarrassing - looking at you, "God's Gun"!

Fortunately, this film is among the very best of the ones you probably haven't heard of. Giuliano Gemma, who was in a lot of B-list spaghettis, and even starred in his own franchise as Man With No Name clone Johnny Ringo, is excellent as the despised illegitimate outcast with the worst job in town (it says "street cleaner" in the synopsis, but what he actually does is empty outside lavatories) who becomes the pupil and eventually partner of the wise old master gunfighter, in a story arc at times so similar to a grittier, nastier version of "Star Wars" that I kept imagining how much better Gemma would have been as Luke Skywalker than Mark Hamill ever was.

Lee Van Cleef is of course the same beady-eyed, hawk-nosed badass you never, ever mess with that he nearly always was, and although he sleepwalked through some of his lesser shoot-em-ups, he gives one of his best performances here, helped greatly by the fact that he obviously gets on well with Gemma. It also helps that his character, unlike the terrifying but one-dimensional Angel-Eyes in "The Good, the Bad and the Ugly", is so morally ambiguous that for about three-quarters of the film you genuinely don't know which side he'll be on in the final showdown. As for Gemma, while he's obviously a nice kid who will do the right thing when the chips are down, his horrendous treatment by the townspeople before he unexpectedly turns out to be the fastest gun in the west makes his flirtation with the Dark Side both inevitable and excusable.

Apart from the leads, the acting is somewhat basic (if you've seen a lot of spaghetti westerns, many of the minor cast members will look very familiar indeed), but you may be pleased to learn that this beautifully remastered widescreen print gives you a choice between the usual badly dubbed English and the original Italian soundtrack. Gemma in particular is a far better actor when somebody else isn't speaking his lines for him in a foreign language. Although there aren't any huge battles or machine-gun massacres, the body-count is well into double figures, which in this kind of film is a must if you're going to get your money's worth. And the gaps between the gunfights are well filled by what is, for a genre where the hero tends to be a grim-faced enigma, an unusual amount of character development. It makes you wonder about all those other spaghetti gunslingers. Maybe even The Man With No Name was just a kid with no surname until the day he decided he'd rather carry a gun than a jobbie bucket?