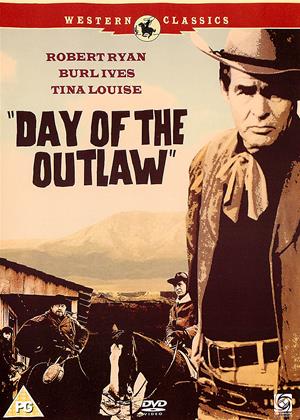 Reviews (1) of Day of the Outlaw

Westerns tend to sun-baked and tense, with confrontations escalating into brief moments of violent action. This one's snowbound, and although it's certainly tense, it's rather slow and oddly lacking in gunplay. Robert Ryan's borderline antihero, a man almost as cold as the landscape he inhabits, begins the film planning to do something extremely unheroic for a very bad reason, but is sidetracked by the arrival of seven brutal thugs on the run after a robbery.

Unfortunately, the pace then becomes a little too stately. Burl Ives, oddly cast but quite effective, is the half-decent leader of the outlaws, and the only thing keeping them in check, but he's got a bullet in him and he's not at all well, so he moves around slowly if at all, and spends a lot of time in bed. His fluctuating health is one of the ticking clocks that ratchet up the tension: will he recover and lead his men out of town, or will he die, leaving them free to rape and kill? The other is the cavalry troop pursuing the robbers, but they're two days behind, so not exactly an imminent threat. "High Noon" gives us an actual ticking clock, so we can see the hero's destiny getting ever closer. Here, it's all a bit vague and meandering. The cavalry will eventually show up, and hopefully the weather will improve before they do and Burl Ives won't drop dead, all of which will probably happen, or not, within approximately 48 hours. It's not really very thrilling.

The hero's problem is how to persuade these men, almost all of whom have few if any redeeming features, to ride a long way out of town through deep snow (slowly) before bullets start flying and everybody dies. Burl Ives is interesting as a once-good man who made one terrible decision, lost everything, and gave up, yet obviously longs for some kind of redemption. Some of his gang are nearly horrible enough to be in a spaghetti western, but the worst of them keep threatening to do dreadful things without usually getting around to doing them. And one crucial scene takes place practically in slow motion because everybody's chilled to the bone. As a character study of people who are nearly all seriously flawed it's not at all bad, but it really could do with just a little bit more action: the fastest-moving and most action-packed scene consists of women being forced to dance energetically with men they detest for quite a long time. And as heroes go, Robert Ryan's grim-faced and rather miserable tough guy is very hard to like.