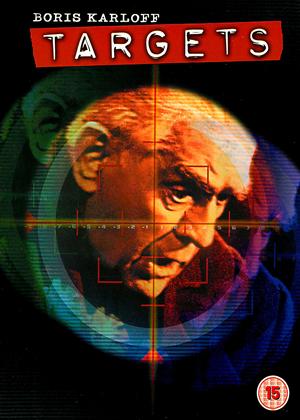 This film, with its theme of disaffected Americans suddenly killing complete strangers for no apparent reason, is even more topical now than it was half a century ago, as well as being the only thing inspired by a mass shooting that isn't another mass shooting or "I Don't Like Mondays". It makes a very strong case for America's obsession with guns being a bad thing because weak, troubled people who have been told all their lives that guns make you strong and have easy access to them may try to solve their problems with guns, and there's only one thing you can do with a gun. And although it's not quite Boris Karloff's last film, it should have been because it's the last movie he was in that was any good. So why isn't it better than it is?

One problem is its self-indulgence. It's fair enough for somebody like Karloff, at the tail-end of an extraordinary career, to indulge himself a bit, because he's earned it. But for Peter Bogdanovich, a first-time director, to cast himself as a character who is basically himself, whose big scene involves getting drunk with Boris Karloff, also basically playing himself, while trying to talk him into putting off his retirement long enough to star in a movie which is heavily implied to be the one we're watching, is just plain odd. It feels as though the real purpose of the scene is to allow Bogdanovich to say: "Hey guys, Boris Karloff is my buddy and we get drunk together and everything, and I can prove it because I've got it on film!" And he really is in love with Boris (they even end up in the same bed!), meaning that Karloff is allowed to spend a little too much time just being himself, in a way which is delightful if you're a big fan of his, but which doesn't exactly ratchet up the dramatic tension.

The other plot thread goes a little too far in the opposite direction. The killer is such a stereotype of the All-American Boy of 50 years ago that himself and his family are almost parodies. He says very little, expresses few emotions, and seems rather stupid, a bovine oaf whose response to some vague discontent he never bothers to explain is to vacantly munch comfort food, and if that doesn't work, shoot people. Why? That's not the point of the film, so we're never told. The trouble is, I'm not quite sure what the actual point of the film is supposed to be. Scarier things happen in reality than in horror films, especially quaint old gothic chillers starring people like Boris Karloff? I think we knew that already. Americans have too many guns? Not news either. The American Dream looked increasingly hollow in the era of the Vietnam War? Not very profound, and I'm not even sure the film's trying to say that.

There's a lot to enjoy here, especially for Karloff fans, but there really should be more. And Bogdanovich seems to have problems directing action, because everything seems just a little bit flat and far too slow. In particular, the climactic scenes really ought to involve much more chaos and panic. Obviously the budget was a factor, but some directors could have pulled it off anyway. Overall, it's good in a lot of places, but it's a bit too satisfied with itself. Karloff's great, but in a way he probably would have been without any direction at all.

By the way, "The Terror", the apparently fictitious film-within-the-film at whose premiere the climax takes place, actually exists. It's a very obscure and completely barking mad Roger Corman movie which is available on DVD, so maybe it would make an interesting double bill with this film.

Debut feature of Peter Bogdanovich is an example of postmodernist film-making. The plot has 2 parallel narratives: an aspiring young director tries to coax an ageing actor, Byron Orlok (Karloff) into one last performance; meanwhile, a young, all-American boy next door murders his wife and mother before embarking on a random killing spree from a watchtower overlooking a highway. The dual narratives converge in a drive-in cinema where Orlok is making a guest appearance at a screening of one of his films (in fact, the not very scary 'The Terror' featuring an early performance by Jack Nicholson).

For its time, Targets is a bold, daring movie. It has a strong anti-Hollywood sensibility eschewing conventional film-making techniques in favour of the avant garde approach of European cinema. The camerawork by Laslo Kovacs is impressively sophisticated. The film features many shots taking the point of view of the gunman, putting the camera behind his sight lines making the audience question their attitude to violence (onscreen and off). The theme of the relationship between violence on and off-screen extends to the narrative. In one memorable scene Orlok describes himself as an "anachronism. My kind of horror isn't horror anymore". Daring film-making techniques must have been particularly unnerving for American audiences just 5 years after the Kennedy assassination. Like other films of the period, Targets does have a strong social message: here it's about the proliferation of guns in the private sector. Bogdanovich seems to be making a rallying call for greater constraints on guns.

Targets is an intelligently crafted film - albeit a bit too self-indulgent in places - which, like it's much better successor, 'The Conversation' depicts a snapshot of America at the time.