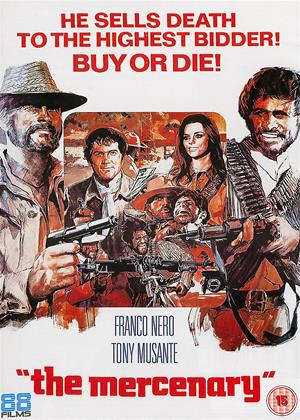 Reviews (1) of The Mercenary

Carry On Up The Revolution! - The Mercenary review by Count Otto Black

Sergio Corbucci and Franco Nero will always be best known as the director and star of "Django", which was essentially "A Fistful Of Dollars" remade with added ultra-violence. Here they try something similar by more or less ripping off "The Good, The Bad And The Ugly" with added Surrealism. Franco Nero is bizarrely cast as a Polish mercenary, mainly so that he can get away with wearing clothes and facial hair appropriate for European high society (apparently he's a friend of the composer Frederic Chopin) in revolutionary Mexico. Though at one point he finds an excuse to disguise himself as an angel, in a scene which also involves a crucified bearded lady with a halo and a machine gun. I'm not making this up, honest!

Talking of strangely dressed characters, according to legend, Jack Palance liked to buy his movie costumes, but after "Shane" led to him being horribly typecast he ended up with far too many identical black evil cowboy outfits. So when Sergio Corbucci approached him to play yet another western baddie, he asked if his character could somehow wear a variety of stylish tuxedos for a change. Which is why the psychopathic Curly is a flamboyant homosexual, complete with a green carnation in his buttonhole like Oscar Wilde and a boyfriend called Sebastian. Like I said, this is NOT your usual western! Did I mention the gunfighting clown? Yes, really...

It's not a perfect movie by any means. Tony Musante, a second-rate actor who would later be incredibly annoying in "The Pope Of Greenwich Village", is nowhere near as bad here in the clichéd rôle of the selfishly anarchic Mexican who eventually learns the true meaning of revolution, but he's still a wee bit irritating. Franco Nero's amoral Pole isn't really a character at all, just a string of plot devices whose personality changes at random intervals to give everybody else a reason to like or dislike him as required by the script. The chaotic, massively destructive action is magnificent whenever it gets properly going, but it flags in the middle, presumably because blowing up a town every ten minutes would have been too expensive if they'd kept doing it throughout the movie. And Jack Palance must have been even more expensive, since Curly is barely in the film compared with the other two, though he almost manages to steal it anyway. We could have done with less Tony Musante and more Jack Palance, the only western villain I can think of who likes killing people so much that he's obviously sexually aroused by it.

Still, if you don't mind a western featuring terrible dubbing, variable acting, a complete absence of logic, clowns, and a Jack Palance nude scene, this barking mad excuse for Italians to cause as much damage to the scenery and each other as they possibly can should certainly keep you entertained for an hour and three-quarters. And it's got one of Ennio Morricone's better scores too.