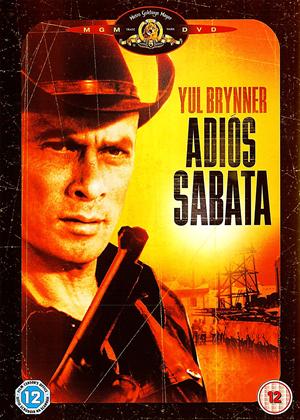 This is a minor masterpiece. It doesn't take itself seriously for one second, but unlike so many Italian comedy westerns, it's still a proper action movie in which people die; one character even makes a running gag out of promising to remember superfluous cast members who get killed, and then of course instantly forgetting them. It's not in any way connected with the two movies in which Lee Van Cleef played a character called Sabata. When those films did well internationally, the Italian version of a movie called "The Bounty Hunters" was hastily re-dubbed so that the character played by Yul Brynner was now called Sabata instead of Indio Black, but you don't need to watch the Sabata films first. In fact, this movie is at least as good as either of them, if not better.

Outrageously over-the-top gunplay at regular intervals? Check. Ridiculously gimmicky weapons? Check (repeatedly). Villain so evil that he makes peasants run away so he can use them for target practice? Check. Huge sum of money that everybody is trying to get their hands on while double-crossing everybody else? Check. The Flamenco Of Death? Check. Wait, what??? This is an action-packed and very good-humored spaghetti western that ticks all the boxes, some of them more than once. The one thing it lacks is originality - the soundtrack even features a music-box that's somehow shoehorned into the plot. But if you don't mind seeing all the elements you've seen before rearranged yet again, this is a movie which rearranges them very well indeed.

Yul Brynner is the same as he usually is - effortlessly charismatic and really, really good at shooting bad guys. Every weapon you can think of and some that haven't occurred to you is employed to keep the mayhem interestingly varied. Every single character is a cliché, apart from one of the "heroes" being an amoral con-man who is highly intelligent but totally inept when it comes to violence. But everybody's having so much fun that the formulaic elements don't matter. Switch your brain off and watch badly-dubbed Italians slaughtering each other in that characteristic way they used to be so good at - you know you want to!

Incidentally, Sabata's ridiculously primitive rapid-fire gun was a real weapon, nicknamed the harmonica rifle.The reason you'll never see it in any western except this one is that it was as lethally impractical as it looks. But the fact that this film's one concession to realism is to give the hero the worst possible gun that actually existed because it looks cool sums up the proceedings very well. Daft, thoroughly enjoyable hi-jinks. Enjoy!