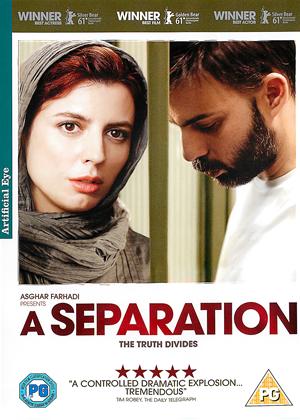 2011 Berlinale Prize of the Ecumenical Jury

Reviews (4) of A Separation

For those who like a good story and world cinema, this is A MUST SEE film - A Separation review by TB

This is a wonderful film. Very intelligently put together using an observant, sensitive, thoughtful script which between director and a superb cast makes the nicely paced 117 minutes engrossing as to how it will end. With the past few years seeing western societies closing off Iran, this film shows a country and society that is slowly changing, which copes by blending modern and traditional values shown through the family at the centre of this film. Five stars!

Quite simply one of the best films I have ever seen. I did not know what to expect. It started out as a simple yet touching story and layer on layer was added to produce a film of great complexity touching sad, moving, tragic and thought provoking it draws you in . The director describes it as a detective story shot in a documentary style but without a detective. It will keep you guessing to the end!

Intense drama of a marriage already falling apart, not coping with the stress of a parent's alzheimers, which is then devastated by the repercussions of an accusation of assault. A fascinating insight into another (Iranian) way of life, and of its women in particular. A film that manages to be sensitive and detailed, but eventually, explosive.

Ambiguous and unsettling - A Separation review by RJ

I've given this film four stars, but with the nagging feeling that I am simultaneously under and over rating it....

I feel like I am overrating it in the sense that I am not sure I enjoyed it as much as four stars would suggest - but it's tricky because I don't think 'enjoyment' is really the intended reaction to this film. It places the viewer in an uncomfortable position by presenting complex characters in an ambiguous and constantly evolving scenario, so that I found my allegiances and opinions regularly changing.

On the other hand I feel like I am underrating it, because it has to be said it is virtually flawless in terms of the kind of film it is aspires to be. I can't really think of any moment which I found to be unbelievable, or any time when a character behaved in a way that did not ring true or where they seemed to be acting in a way that serviced the plot rather than their character.

In summary, I found this to be an engaging and challenging film, which after one viewing I still feel a sense of ambiguity about, largely because it never allowed me to get comfortable by making easy judgments.

Nader and Simin are a young couple from Tehran, Iran. They’ve decided to migrate to another country with their 11-year-old daughter Termeh (Sarina Farhadi). But the husband Nader (Peyman Ma’adi) has a change of heart; he decides to stay to care for his Alzheimer’s-plagued father and this forces his wife Simin (Leila Hatami) to file for divorce. Simin still wants to leave but she can only do this with Nader’s consent – something he has no plan of giving away.

‘Nader and Simin: A Separation’ catapults the film’s plot with the divorce, Iranian style. In the film we are given an idea on how the courts work in Iran, mostly they speak before a judge and make their case. A great technique the film utilizes is the cast talking directly to camera when they’re supposed to be speaking to a judge. It’s a direct symbolism – we watch them, hence, we are the judge. From there the film moves forward with another issue at hand. As Nader remains in Iran and cares for his ailing father, he hires a young woman, Razieh (Sareh Bayat).

Unbeknownst to Nader, Razieh is ill-equipped to care for an old man, doubtful of what she must do when Nader’s father wets his trousers. Her husband, the hot-headed Hodjat (Shahab Hossein) is not too privy of his wife being in the same household with a married man, without another man present. But Razieh needs the money for her family and hiding her condition – she’s pregnant – she forges on.

The film is surprisingly very succinct in its message: People in Iran are just like us. They have a divide between the middle-class and the impoverished. They go through marriage dissolutions. They have to care for their elderly. But also, people in Iran are not just like us. They have strong ties with their religion to the point of irrationality. They treat women differently; at times oppressive and backwards. In the end, the film is a domestic-legal drama that speaks much in hushed tones.