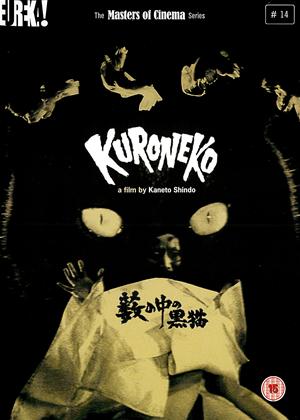 A disproportionate amount of Japanese folklore concerns abused women returning from the grave as empowered she-devils to wreak bloody revenge on men. One might almost think that Japanese men collectively knew they were wrong to treat the opposite sex as something between pets and furniture, and feared that maybe the karmic imbalance might have consequences. This creepily passionate tale is a perfect example of that theme. It's also a perfect example of how fairy tales the world over started out a lot more Grimm than they are now, and frequently had to be heavily edited for adult content before they were suitable for the kiddies.

It also illustrates another interesting aspect of Japanese folklore. By the sixties, monsters in western cinema had become clichés. Vampires were soulless, utterly evil predators that existed purely as antagonists, werewolves were reluctant monsters who suffered from a dreadful curse and were thus to be pitied as much as their victims, and ghosts were merciless seekers of a very specific vengeance. Here we see monsters derived from a less obsolete and thus richer supernatural tradition who are a complex blend of all of the above: avenging ghosts who can get very physical in all sorts of ways, who are also vampiric werecats, and, like vampires, are inescapably bound to their fate because they're dead, but, like werewolves, have enough humanity left to loathe what they've become and struggle against it. Though as it turns out, some struggle harder than others.

The special effects are crude and minimal, but the stylized dreamlike quality of large parts of the film means this doesn't matter. And unlike Chinese movies of this type, there's none of that sub-Three Stooges "funny" business that so often ruins Asian horror. The nearest it gets to joking is a "heroic" warrior's very carefully worded recounting of a fight we've just seen, so we know he was terrified out of his wits and won pretty much by mistake (this is surely a nod to a similar scene in Kurosawa's "Rashomon"). Ultimately this film is about love versus duty; all three major characters are given a terrible task by superiors they cannot defy without dire consequences to themselves, but which clashes disastrously with their everything in them that's truly good.

What prevents this eerily atmospheric and sometimes genuinely moving film from being a true classic is that the simple story isn't really adequate to fill an hour and a half. "Kwaidan" (1964), the breakout movie that put Asian horror on the international map, dealt with similar material, but it was an anthology film containing several stories. "Kuroneko" stretches one such tale to breaking point, and I'm afraid that it does sometimes drag. Not only is it slow-paced, but every event that could possibly be repeated is shown more often than is strictly necessary. If ever a movie cried out for subplots it's this one! Its companion-piece "Onibaba" is better-known because although it deals with a similar situation, the supernatural elements are minimal, so the characters aren't locked into the rigid structure of a fairy-tale, making it a story about humans into whose lives weirdness intrudes. This is basically a story about ghosts into whose extremely limited un-lives humanity intrudes, and I'm afraid it doesn't work quite so well.

Shindo-san returns to the same themes he visited with the classic Onibaba. However they are distinctly seperate tales of revenge, but his classic style is evident through the splendid angles, cinematography and atmospheric lighting. There is no dialogue during the first ten minutes, as a mother and daughter are visited by a group of marauding samurai. Soon their lust for food turns to the flesh and the women do not survive their ordeal. Pledging themselves to the evil gods, they invoke a curse to suck the blood from any samurai. The hero of this tale left beforehand a soldier and returns as a samurai, soon embarking on a quest to find his wife and mother, or discover their fate. What he uncovers are enemies beyond his comprehension, yet he it tasked with ridding the bamboo forest of this evil curse. Kuroneko is a classic example of Japanese cinema, thought provoking and haunting, it is beautiful to behold.

This Japanese ghost story, otherwise known as ‘A Black Cat in a Bamboo Grove’ reminds me, in its early stages at least, of an Ingmar Bergman film. Everything is desolate and comfortless. There is minimalist music and settings, and an extraordinarily brutal opening scene is carried out without spectacle. When a group of Samurai soldiers rape and kill two women and then set fire to their home, it is carried out with the minimum of fuss, with the soldiers simply leaving to carry on with their day once the deed has been done.

The ghosts of the two women, Yone (Nobuko Otowa) and her daughter-in-law Shige (Kiwako Taichi), cause problems for the governor, Minamoto no Raiko (Kei Sato) by seducing and the tearing out the throats of various soldiers, so he orders Gintoki (Kichiemon Nakamura) to find and destroy them. Inconveniently for all concerned, however, Gintoki finds that the two women are the spirits of his mother and wife, and they have made a pact to kill every Samurai they meet.

This engaging story is based on a supernatural folk-tale and is very nicely directed by Kaneto Shindo, who makes the most of the twin spectres’ sporadic appearances and utilizes subtle special effects to remind us they are not of this world. This is especially true when events take on yet darker and more fantastical tones, many of which involve cats.

Apart from being critically acclaimed (quite rightly), Nobuko Otowa won a Best Actress award, and Kiyomi Kuroda won an award for his cinematography.