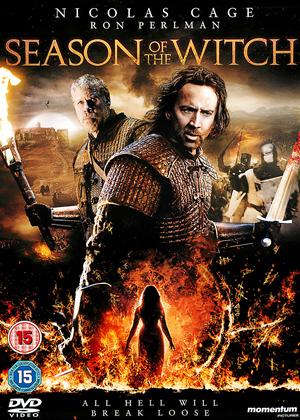 Reviews (2) of Season of the Witch

Don't waste your time - Season of the Witch review by RP

Nicolas Cage and Ron Perlman star as two disillusioned Crusader knights journeying home across medieval Europe. They come across a plague-ridden town and agree to escort a young woman, suspected of being a witch and spreading plague, to a distant monastery where she can be exorcised – or something.

Someone said to me before I watched this: don't waste your time. They were right – this is complete twaddle from beginning to end, and I have now wasted 90 minutes of my life which I will never get back. Apparently, strong US accents were prevalent in medieval Europe. Certainly, appalling dialogue was common and special effects were dreadful. Nick Cage, you should be ashamed of appearing in such rubbish.

The rating system here doesn't allow 0/5 stars, so I'll give it the lowest that I can. And I'll pass on the warning again: don't waste your time.

Good Story - Season of the Witch review by Titch

This movie has a good story , the acting was good, the accents not the best.

I have always enjoyed Nicolas Cage or Ron Pearlman movies, so having them both in the same film my dreams have come true .That being said this does not change the fact that americans have never really been able to pull off the english accent.

Season of the Witch review by Alyse Garner - Cinema Paradiso

Season of the Witch sees comic book demon star Ron “Hellboy” Perlman and Nicholas “why do I still have a career” Cage dressed up as medieval knights deserting after many years fighting in the Crusades. With a pretence that involves Cage and Perlman leaving the army on “moral grounds” the film opens with a promising start: this should be good for a laugh. The film progresses however and takes a significant downward turn.

With his ever intense growl Cage and sword-happy Perlman flee to a city gripped by the Black Death and a belief that it was witchcraft that brought the plague. It’s a real shame to see, after her impressive performance in the BBC’s adaptation of Little Dorrit, British actress Claire Foy crop up as the possessed local witch accused of cursing the land. As Cage and Perlman as escorts Foy’s character, known only as “The Girl”, is transported to a remote monetary for trial. Obviously the road they travel does not run smooth and the band of men; now including a guide, a priest and an alter boy; are subjected to everything from wolf attacks to hallucination.

Predictably violent and epic this fantasy action film somehow manages to carry all the traits of a medieval sword and sorcery tale – witchcraft, knights, religion, heroism – without any of the character or finesse of some of it’s predecessors. The film was adequate, the acting tolerable – by Cage’s standards – and the storyline straightforward, but it simply fell short in its attempt to tell an epic tale.

The film makes attempts at tension and intrigue, throwing in all sorts of sub-plots and suggestive comments, all of which seem to lead to nothing.

Cage’s character, for example, is dogged by the death of a young girl that hangs over his conscious, whilst the behaviour of the priest when left alone with the Girl is questioned. Neither plot for fill their potential however and their somewhat weak resolutions simply add to the list of the film’s failings.

To the film’s credit the visual effects were impressive and it even managed to slip in a few deadpan jokes and sarcastic puns along the way. These do little however to dispel the monotony of the film as a whole and unfortunately the film takes itself far too seriously to be appreciated for its failings.