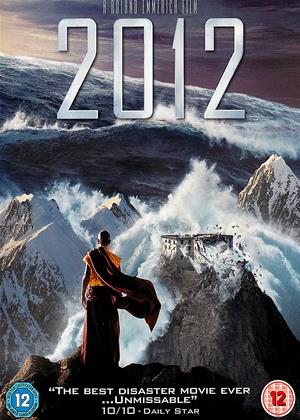 Yes, the special effects are good. No big deal, these days. Seen it all before...

The funniest thing is when they show archive TV news clips to show riots happening around the world - the one from London is the famous, much-showed image of a woman being knocked down by a police horse in the poll tax riots os the 90s! I laughed out loud at this point!

Emmerich was the director, wasn't he, who made U571 which claimed the Americans captured a U-boat (actually, the British did)? And didn't he also make The Patriot which showed the British committing atrocities which were actually committed by the gestapo in WWII? The guy is probably upset that we won the war eh...

But what I really want to know is: will we ever have a white man playing the president of the USA ever again I wonder... Or perhaps even a bad, 'unsaintly' black man? Or are Americans to guilty about their undoubted racial crimes to do that?

Hollywood tripe. Watch it and scream with laughter!

Dr. Adrian Helmsley, part of a worldwide geophysical team investigating the effect on the earth of radiation from unprecedented solar storms, learns that the earth's core is heating up. He warns U.S. President Thomas Wilson that the crust of the earth is becoming unstable and that without proper preparations for saving a fraction of the world's population, the entire race is doomed. Meanwhile, writer Jackson Curtis stumbles on the same information. While the world's leaders race to build "arks" to escape the impending cataclysm, Curtis struggles to find a way to save his family. Meanwhile, volcanic eruptions and earthquakes of unprecedented strength wreak havoc around the world.

Reviewed in one word - 2012 review by CP Customer

Simple to sum up this film. Crap. Honestly its that bad. Plot is weak the science is really bad and the effects dont look real at all.

Great effects, especially the escape scene in the limo (albeit completely daft and unrealistic), but overall the film is dull and way too long. If you must watch something in this genre I would recommend The Day after Tomorrow which is much better.

Some people have reviewed this film as poor. They are looking too deep. It is cracking entertainment and wonderful special effects. Ignore the plot whose purpose is to save enough people to start the world over again and focus on enjoying the action! Consider could the power of nature really destroy the earth? If so how would we survive? maybe this is not too far from the realms of possibility after all.

Really loved this film. Good story to it, as realistic as it can be under the circumstances!!

The special effects were amazing, The Earth falling away from behind the cars and the aeroplane are just so realistic. I could watch it again and again.

This is the worst film I've ever watched (but I've not watched Sex in the City 2).

With reference to the front case of the DVD, this film can be considered as conclusive proof that the Daily Star is written by idiots for idiots. Brainless plot, brainless script... just brainless. This film wasted 151 minutes of my life, and doesn't warrant me wasting any more time on this review.

What is your favourite film of the last ten years? Reading the other reviews it might surprise you to learn, this is mine. Yes, the disaster movie, with John Cusack. Now, before you give up on me completely, let me explain. I know it is far too long. The lead actor, Cusack, who I love, is terrible in it. Danny Glover as the President looks terrified - for all the wrong reasons! The best character (the Indian scientist) gets killed, and the ending is risible.

Against all that, when it comes to destroying the world, I'd argue that there is no better film in cinema from 'The Day the Earth Caught Fire' (1961) to 'Noah' (2014). I loved it from the first viewing and I've seen it three times.

That said, it took me two tries of watching to get all the way to that risible ending. Part of the reason is the enormous glee of the destruction. The moment when, as the plane flies by, desks, chairs and people slide out into mid air from LA skyscrapers falling into the abyss had me laughing aloud too, at the sheer outrageousness of it. The great waves engulfing whole coastlines are a sight rarely even imagined, let alone seen. From 60's let-down 'Krakatoa - East of Java' to 'Poseidon Adventure' whole films have promised the big wave. Even the initial cracks in the streets that alert us to the coming trouble have a delicious frisson, like the scene in the first Terminator film where Arnie's truck parks outside Sarah Connors house and the wheel unthinkingly crushes a child's toy. The film has the same structural inevitability as 'Die Hard' so that no matter how preposterous it gets before the end, you have been drawn in to the limit of your ability to suspend disbelief, long, long before. It repays re-watching.

I stopped watching it the first time as I was surfeited with the spectacle of what I had seen. On a third viewing, it came as a surprise to realise they are Arks not spaceships when I finally saw it to the end. I've looked to see if there are any cinema showings because I'd love to watch it on the big screen, just one more time. True, the ending is just horrible. The Ark doors open; the world hasn't been destroyed completely after

all - Africa! The people walk out into what is supposed to be a new tomorrow, its just none of them was very likable. Possibly any ending would be an anti-climax after what we have seen, but if so what is needed is something more like the end of masterpieces 'Quatermass and the Pit' or 'Where Eagles Dare' where, in the final scene, the lead characters stand or sit in silence, just looking utterly exhausted; completely spent by what they have been through.

I really did not like The Day After Tomorrow or Independence Day, both by the same Director, Roland Emmerich. The first, with its xenophobia

and misapplied technology seemed infantile, while The Day After Tomorrow was a joyless dry-run of this, the real thing. In the earlier version, seeing landmarks as if destroyed in an apocalyptic future brought a sense of shameful prurience (not glee at all), and the lovers quest through a destroyed world just seemed a trivialisation of the subject, so that the whole venture was somehow lustreless.

Predictable and ludicrous as 2012 is, it hangs together all the way through. The 'cynical politician' as the hero's antithesis is note-perfect, even when the heroes are a bit wet (literally as well as physically). The president's daughter is fine. Woody Harrelson as the batty seer gives the film one of its highpoints of humanity. His terrible animated film, so bad it's good - of which he is so proud – is a particular favourite moment!