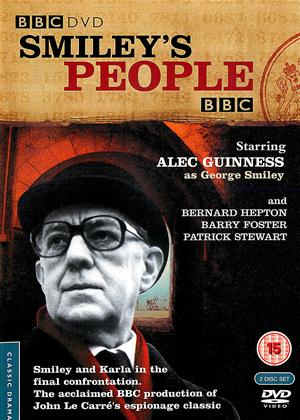 Having watched the 2011 film 'Tinker Tailor Soldier Spy' – and despite an excellent performance by Gary Oldman - been disappointed, I re-watched the BBC TV series with Alec Guinness in the lead role. Superb stuff. And being a glutton for punishment, I have now re-watched 'Smiley's People'. [Aside: Why a glutton? Well, the film was over 2 hours, the first TV series was over 5 hours, and this one was just under 6 hours. That's a heck of a lot of George Smiley!]

Again, it's a complex tale which goes something like this... Smiley is called out of retirement yet again, this time because of his background knowledge of Soviet emigré activity. An elderly emigré ex-General has been murdered on Hampstead Heath, leading Smiley to discover that an Soviet emigré woman resident in Paris has been used by the Russians to set up a fake identity for a young woman being treated in a Swiss private psychiatric clinic. And it just happens that this is the daughter of Smiley's old adversary, Karla, who has misused his authority to first smuggle her out of the country and then fund her treatment in the West. And Smiley uses this to blackmail Karla to defect. I've given you this limited detail (no, it's not a spoiler) so you can see how complex the story is and why it takes nearly 6 hours to tell and why a much shorter film (I understand that one is planned) will have to skip much of the backstory and detail. And the resulting film may again be another good yet ultimately unsatisfying re-make :(

Because of the increased complexity of the story, 'Smiley's People' is not as straightforward as 'Tinker Tailor Soldier Spy' and requires even more concentration to follow the twists and turns of multiple characters, some of whom only appear in short scenes. But Alec Guinness as Smiley anchors the story together and makes an unlikely tale convincing. Without him it would be worth 3 stars, with him it's worth 4/5 stars. Recommended.

George Smiley, incomparably played by Alec Guinness, is temporarily called out of retirement more or less by accident, when another old cold warrior whose time everyone thinks has passed claims to have vital information, and won't pass it on to anyone but Smiley. Unfortunately before he can do so he is murdered in a particularly nasty way. Realizing that he has one last chance to cross swords with the mysterious Karla, the Russian spymaster responsible for the events of "Tinker, Tailor, Soldier, Spy", Smiley, assisted by loyal though mostly geriatric comrades from his glory days, conducts an unofficial and sometimes illegal personal investigation.

Unlike the ensemble acting we saw in "Tinker, Tailor", this is to a much greater extent a one-man show for Alec Guinness as Smiley, and he has to carry a great deal of the story, though the supporting cast are almost all excellent. In addition to displaying logical and observational skills worthy of Sherlock Holmes, Smiley is even more obviously than before a soft-spoken man with a core of solid granite, who begins by unflinchingly studying a crime-scene that makes one of the attending policemen throw up, and never wavers from his position of calm, polite, and absolute authority until, near the end, he has to make a choice that forces him to question everything he stands for.

Even more than "Tinker, Tailor", "Smiley's People" is all about moral compromise. George Smiley is a good man because he always tries to do the right thing, but sometimes he has to do it in extremely dubious ways that involve putting his innate decency temporarily on one side. His fanatical adversary Karla is so hard to defeat because he's almost literally inhuman. Smiley's terrible dilemma is that he knows he can only defeat him by using his own utterly ruthless and morally reprehensible tactics against him; but for that to happen, Smiley must, in a sense, become Karla. Can he do it, and is it worth the price?

Lacking the tight plotting and intense cameraderie of "Tinker, Tailor", this is a somewhat inferior story, partly because it relies to a much greater extent on Smiley sorting things out all by himself, and good though Alec Guinness is, he's better when he has somebody to interact with. Also, the central mystery is resolved quite early on, so the question driving the story isn't "who is the mole?" but "can George Smiley force himself to be cold-blooded enough to beat Karla at his own game?", which is nowhere near as much fun. And it has to be said that a few of the supporting cast cross the line into caricature.

However, as TV mini-series go, it's still far better than most, and crucially has sufficiently good writing and acting that, apart from the characters reprising their "Tinker, Tailor" rôles, we can't instantly decide who these people are and what motivates them; we have to get to know them, and maybe the "good" guy will reveal himself as a cynical hypocrite, or the lowlife scumbag will turn out to have a strange kind of nobility. And if you want to see a master-class in understated acting, the facial expressions of George Smiley in the strip-club are a wonder to behold! Highly recommended.