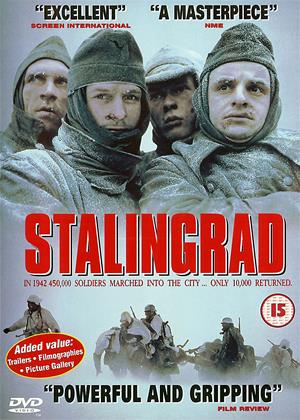 Synopsis:
In the spring of 1942 German troops advance deep into the Soviet Union, en route to Stalingrad. Hitler, seriously misjudging the 1 tenacity of the Red Army, is convinced that the city can be conquered before winter. Inadequately clothed and without sufficient food, the Nazi troops literally freeze and starve to death, largely abandoned by their leaders. For the soldiers Fritz, Hans, Rollo and GeGe the struggle for life has just begun. Gunfire and bombs are only one part of this hell; most of the soldiers will lose the battle against hunger and cold.
The film presents this turning point in World War II as a vast tableau of horror in which the average German soldier was as much a victim of Nazi evil as were the Soviet people.
Actors:
Dominique Horwitz, Thomas Kretschmann, Sebastian Rudolph, Jochen Nickel, Dana Vávrová, Martin Benrath, Sylvester Groth, Karel Hermánek, Heinz Emigholz, Ferdinand Schuster, Oliver Broumis, Dieter Okras, Zdenek Vencl, Mark Kuhn, Thorsten Bolloff, Alexander Wachholz, J. Alfred Mehnert, Ulrike Arnold, Christian Knoepfle, Flip Cap
Directors:
Joseph Vilsmaier
Producers:
Hanno Huth, Günter Rohrbach
Writers:
Jürgen Büscher, Johannes Heide
Studio:
Entertainment In Video
Genres:
Action & Adventure, Classics, Drama
Countries:
Germany

I had read Antony Beevor's (very readable) history book 'Stalingrad', I had seen 'Enemy At the Gates' and I had seen the episode on 'The World At War' that dealt with the battle of Stalingrad. But all of these were Western European accounts and having learned something of what is one of the bloodiest battles in history with up to 2 million deaths, I wanted a different perspective - and ordered up a copy of this film, a 1993 German film directed by Joseph Vilsmaier.

I have to say something about the DVD first. The Region 2 copy that I received from Cinema Paradiso is *dreadful*. It has a ridiculously bad dubbed English soundtrack with embarrassing, cringeworthy bogus German accents that makes the film unwatchable, and it doesn't have any original German language or subtitles. I returned it almost unwatched. Still wanting to see the film, I purchased a Region 1 copy on eBay - this time, in proper widescreen, 5.1 sound, the option of German with subtitles, and a range of 'extras'. Much better :)

This is one of the best anti-war films I have seen and gives an account of the battle from a German perspective. It tells the tale of a platoon initially relaxing in Italy after a successful North Africa campaign, before they are shipped off to the Eastern front. It then follows them through assorted battle scenes - suffice to say there are few survivors - attempts to obtain almost non-existent medical assistance, attempts to escape the front on the last plane out, until the eventual death of the final few in the snow.

From an upbeat beginning the film shows the decline in morale as defeat looms ever closer and it is clear to them that the Russians - and the Russian winter - have won. Yes, it's a downbeat film, but quite engrossing.

As an aside, the director cast his wife Dana Vávrová as the Russian woman Irina.

This is a great war film about a turning point in the war - the Germans' defeat at Stalingrad which, crucially, stopped the Nazis moving south to the middle east and seizing the oil that was partly powering the British war effort. The film does not flinch in its portrayal of brutal Nazis and brutal Russians too. It shows war as a messay amoral business............................. Sadly, this is ruined by the fact that the film is dubbed - not very well somtimes - and subtitles are not even given for passages of writing in German! Fortunately, I can understand a bit of German! Subtitles throughout would have been far far better - I hope to watch this film again with subtitles at some stage.

Shame about the dubbing - Stalingrad review by DT

Reasonable film with a decent script - storyline, although all looking a bit dated in comparison to today's stuff! This would be much more enjoyable if it were subtitled instead of the very poor dubbing which makes it a bit cheesy, the film shows the harsh reality of the cold, brutal conditions these poor souls (on both sides) had to fight in.

Dubbed in English - Stalingrad review by AM

This film is in Geman but has English dubbing and English subtitles for the German original are not available. Very poor and unwatchable with the dubbing.

A good war film, but try to see the subtitled version (the dubbed one isn't great) - Stalingrad review by Philip in Paradiso

This is a film about the battle of Stalingrad, during WWII, between the Germans and Axis armed forces, and the Soviet army, which resulted, as we know, in a humiliating defeat for the Nazis - a turning point in the war paving the way for the eventual defeat of Nazi Germany. The film is good and interesting, although it starts a bit slowly. All of it is seen through the eyes of a unit of German soldiers transferred from the (quiet) Italian front to the (apocalyptic) Russian front. The movie shows what they go through, and how they respond to events.

The film is not a masterpiece, and it is made in the classical - perhaps even predictable, up to a point - format of a WWII war film. But it is a good film. The biggest drawback, pointed out by other reviewers, is the atrocious dubbing, which makes the film sound like a shoddy TV drama at times: the (German) actors speak with a (pseudo-) Teutonic accent in English which truly grates and partly ruins the movie. We should be provided with a German copy with subtitles, and it is a great shame that it is not the case.

The film shows repeated atrocities perpetrated by German soldiers (burning down villages, executing civilians, etc.). On the other hand, it implies that most ordinary soldiers, also on the Eastern front, were not particularly anti-Russian or pro-Nazi; they may have been patriotic and won over by Nazi propaganda, but, at heart, they were just ordinary German soldiers dragged into the horrors of war. In other words, apart from a few characters who are clearly rabid and militant Nazis (one in particular), the other, regular troops are not ideologically motivated and even feel rather sorry, at times, for the fate meted out to Russian civilians. I must say I believe this is self-serving and not entirely honest or accurate historically - a rather German way of exonerating the regular troops. In other words, everyone was a victim of Nazism, including ordinary Germans, including ordinary German soldiers, who got forced to commit atrocities under Nazi command against their better judgment.

To set the record straight, we now know from many studies, books, etc. that this was not the case. The Wehrmacht (in particular the officers, but not only) were aware of what was going on, including the systematic atrocities committed on the Eastern front, against Slavs and Jews. In many cases, the regular army provided support to specialist units tasked with carrying out mass murder against Jewish communities, for instance (more particularly: see role of the Einsatzgruppen: https://en.wikipedia.org/wiki/Einsatzgruppen).

There is no doubt that the regular army was involved in war crimes on the Eastern front, and that the hatred for Slavs in general, and the Russians in particular, was deep-seated. As a result, it does not seem realistic to suggest that a majority of soldiers in the German army would have been shocked to see Russian civilians being treated like animals to be slaughtered by German forces across the board. It simply does not add up. I believe that many German soldiers, also from the regular army, would have been only too willing - eager even - to take part in the atrocities in question, as opposed to being forced to perform them by ideologically driven Nazi officers. To start with, the support for the Nazi party in 1930s Germany was massive. But of course, after Stalingrad, many Germans realised the writing was on the wall, and the entire satanical project would, sooner or later, collapse, as, thankfully, it did eventually. Only the convinced Nazis supported the regime to the bitter end; but the German armed forces carried on fighting - and fighting very hard on every front - to the very end, all the same.

I still recommend the film. The tank battle in the snow is especially memorable, even though it is also horrific.