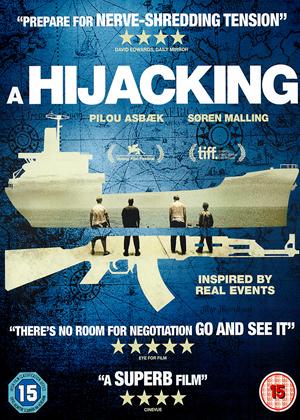 Reviews (6) of A Hijacking

A foil for Captain Phillips - A Hijacking review by JD

If you enjoyed Captain Phillips as I did, you will watch this Danish take on the same situation and probably also think that the films run true to national stereotype. The American solution: send in the marines and swot team, the Danes: deep introspection and desperate sadness.The draining stress of 2 months of negotiation from a hijacked ship is tiring to watch. There are some truly awesome scenes of men under huge stress. Most Danish films I have seen have these 2 actors in, its because they are magnificent.

This is a great film. It's very tense and gripping, and so claustrophobic and sweaty you can almost feel the African heat oozing through the TV screen into your eyes.

OK, so the Tom Hanks movie Captain Philips was not bad - but as per usual for a Hollywood movie, it had to obey certain rules - use the tropes of an action movie.

This is much more refined and intelligent - all about the dreadful progress of strained negotiations (a Brit actor features here but do not know his name). It's really tense and one really does not know how it will end - well or badly.

This is highly recommended for all intelligent film fans. 5 stars.

This got my close attention, from start to finish. - A Hijacking review by DW

Despite the scenario "Ship is held to ransom by Somali pirates", there's no comic book hero to carry us through to a predictable conclusion. The atmosphere is fully realistic, especially the filming in the very restricted spaces on board: the camera man (or woman) must be extremely small!

Tense. Gripping. Claustrophobic. An excellent film from Danish director Tobias Lindholm (the writer of 'The Hunt' and the TV drama series 'Borgen') tells the story of a cargo ship hijacked by Somali pirates who hold the ship and crew hostage for a multi-million dollar ransom. The story is told from two sides: the imprisoned and terrorised crew, and the negotiation team back at the shipping company's HQ.

It's in subtitled Danish with some English, but don't let that put you off - it's a superb drama. And there's no heroic rescue from a Hollywood superstar arriving with guns blazing - it's far more gritty and down to earth for that.

Loved it - A Hijacking review by VC

Nice to see the old Danish crew back again!

Søren Malling really makes this film. His quiet, understated and rather reserved acting, as always, conveys emotion with so much more power than somebody trying to make a Shakespearian impression. He really makes you feel what is going on inside the man, behind the mask. This is not an action thriller, and you won't be on the edge of your seat biting your nails, but it had my attention throughout. I think the director almost wants to show you "a day in the life of your usual Somali pirate hostages" except it's a few months. The approach is quite different to what you would expect, when treating a subject like this. In some ways it's like a series of candid camera shots of scenes on the boat and back in the shipping office. It shows us people as they are in the situation without judging. You can't help feeling annoyed with the Expert Negotiator or wondering if the Somalis ever spare a thought for the families back home, but in the end they are all just people.

A little dull - A Hijacking review by CP Customer

If you want an action movie then this is not for you.It is really just about the negotiations and little about the hijacking, there isnt even any action of the pirates boarding the ship.After seeing Captain Phillips this is a low budget poorer version

A Hijacking (aka Kapringen) review by Alyse Garner - Cinema Paradiso

Hijacking, original Danish title “Kapringen” is a tense European drama about a Danish commercial cargo ship that is hijacked by Somali pirates and held for ransom.

With much of the focus of the film on the attempts by CEO and authorities back home to free the ship and its crew A Hijacking is a far cry from anything Hollywood could possibly produce on the subject; and with the upcoming release of Paul Greengrasses Captain Phillip we’ll soon have the cinematic proof.

Where I can not help but envision Hollywood taking the action hero approach this European drama follows Peter C. Ludvigsen a somewhat reluctant hero who takes it upon himself to negotiate with the dangerous pirates. Played brilliantly by comedian Soren Malling (known for a recurring role in Borgen and Nikolaj Arcel’s A Royal Affair) Ludvigsen ignores the advice of others when told to hire a professional negotiator and attempts to solve the problem himself, however the pirates rejection of his first cash offering turn this into a long running affair, where clearly it is going to be more complex than the unwise Ludvigsen initially hoped.

The length of the hijacking takes its toll on those left ashore as well as those aboard the ship, slowly Ludvigsen begins to deteriorate, worn down by the stress and fear that constantly has a hold of him; where one begins the film expecting he will be driven by profit and the companies financial gain we soon see the gentle but wholly believable change as the reality of the situation takes hold.

And reality is what shines most brightly out of this piece overall, the characters lead the entire story and it is their emotions and behaviour that make this such a captivating piece of cinema – never mind the heroes and Hollywood histrionics, A Hijacking offers a brief insight into the harrowing and guilt inducing repercussions of an illegal hijacking.