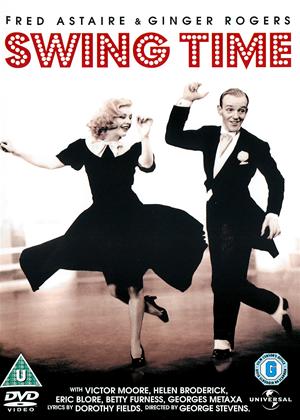 Swing Time represented the last film of the apogee of Fred and Ginger's box office appeal. It was a brief supremacy, three years, but looking back they define a great deal of the appeal of 1930s cinema. Here dancer/gambler Lucky (Fred Astaire) has missed his marriage to a rich looker (Betty Furness) and is told by her father that he can't marry her until he has $25000 in his pocket. He travels to New York and being as fortunate as his name suggests it doesn't take Lucky long to accrue wealth. But having stumbled on Penny/Ginger at a dancing school, he's not sure he wants to return anymore.

After Top Hat, Eric Blore is back, as the owner of the dancing school. Comedian Helen Broderick is again Ginger's older pal. The weakness of Swing Time (though many feel it is the duo's best film) is that it lacks the witty script of Top Hat, and Fred's character really isn't all that easy to like.

But, it does boast an amazing series of musical standards by Dorothy Fields and Jerome Kern, and some dance numbers that can be included among the best of Astaire and Rogers. Fred gets to sing The Way You Look Tonight, one of the greatest romantic ballads ever. The real showpiece of the film is his Bojangles production a tribute to Bill Robinson  with the three shadows of the dancer arranged across a back projection, which signals the ambitious staging of Astaire's later films. And the two stars dancing together to Never Gonna Dance are glorious.

And there's Pick Yourself Up, A Fine Romance and the title waltz too! The art deco sets are wonderful and part of what we remember their films for. Neither Astaire nor Rogers was a great actor, neither had a great voice (his is better). Nonetheless, time spent with them is an avenue into a world of romance, grace and still alluring sophistication. There is no other pair in cinema who are remotely comparable.

Warning, film includes a number that is now racially unacceptable.