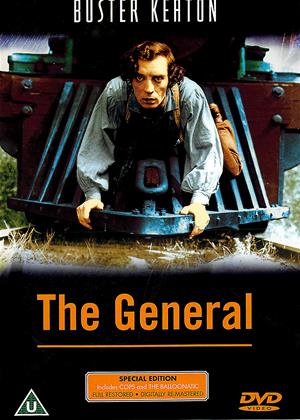 Reviews (5) of The General

This 1926 film starts quite slowly but stick with it and you'll get to the wonderful comedy routines and astounding acrobatic stunts. It's a great film to introduce children, or anyone, to the joys of silent comedy. My kids love this movie, they are amazed by the simplicity of the special effects and the split second timing of the stunts. (They'd also recommend "Oh, Mr. Porter!" from 1937 for more fun with trains...)

The only disappointment on this DVD is the music - instead of a specially written score there is a series of piano rags. Pleasant enough, but music underlining the action would have been even better. See films like this with live accompaniment if you get the chance.

Great Film, Shame About The Video... - The General review by Count Otto Black

I assume from the previous review that this rental company has a number of different versions of this movie, and it's pure potluck which one you get. In the interests of better customer service, I'm giving this film one star, not because of Buster Keaton's performance, but because the DVD I was sent was literally painful to watch, and consequently I didn't watch it for very long.

I refer to the 2004 DVD produced by Elstree Hill Entertainment, which I presume has absolutely nothing to do with the illustrious Elstree Film Studios, but would like people to think it does. Obviously I don't expect perfection from a movie this old, but there's more than the odd scratch wrong with this! It looks like a tenth-generation video copy, it's incredibly grainy, it wobbles, it's most certainly not in fullscreen format despite the info give here, and worst of all, the entire film is out of focus.

I'm not reviewing the film, I'm reviewing the unwatchable version of it you may and up attempting to watch. Infinitely better digitally restored prints of silent movies far more obscure than this starring people a lot less famous than Buster Keaton exist, so presumably I've just given up on a DVD transfer of it that's far worse than most. If I may quote Amazon...?

I have several Elstree Hill dvds and the quality is deplorable on all of them. Unfortunatly they were presents making it difficult to return. I shall make sure that this Companys products are not purchased in future. D. Newson.

Seriously, CinemaParadiso, you're making yourselves look cheap here! And for everybody else, this film is in the public domain, so a free legal download of it would probably be no worse than the DVD this company may charge you to rent.

Deservedly regarded as a silent classic - The General review by DH

It may be 91 years old but it kept me entertained throughout. Very inventive physical comedy. I do, however, agree with KM's comments regarding the piano accompaniment.

Beware... - The General review by GW

It goes without saying that this film is a classic of its era - or maybe any era.

in common with every other Elstree Hill DVD I've ever seen (which, regrettably is quite a few) the technical quality of this offering is excrable! - so bad, in fact. that it ruins the entire movie.

This civil war action-comedy is now considered Buster's classic but it made a big loss at the time and wasn't well received by the critics. It is based on a true story published by a Union soldier, but Keaton switched it to be pro-South as he thought that would be more popular! He plays an engine driver who isn't allowed to enlist and is consequently shunned by his fiancée. His train, with his partner on board is stolen by Northern spies and Buster must retrieve the train, rescue the girl and secure a crucial strategic position for the Confederates.

The General is a highly ambitious film (especially for a comedy) with a vast cast of extras playing out huge battle scenes, with spectacular stunts and effects shot in out of the way locations within a period setting. At this part of his career, Keaton was thinking bigger than his contemporaries. This is far from Chaplin's materials for a comedy being a boy, and girl, and a cop, as is imaginable. Sadly, its failure meant his independence was compromised and he would soon sign a disastrous deal with MGM sending him into a career spiral.

As someone would one day (erroneously) predict about Gone With the Wind, no one ever made any money on a film about the civil war. Half the country just isn't going to like it. And while the film is spectacular, it isn't Buster's funniest film, and not just because people are dying on screen. But it does look incredible, its period detail is persuasive and the star gives a brilliant demonstration of his prodigious talent as a physical actor and comedian.