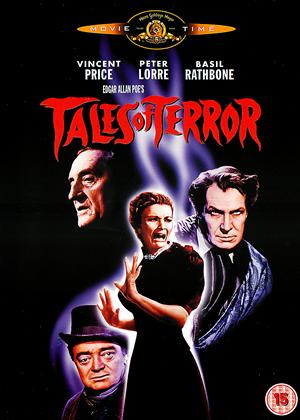 Synopsis:
In his earlier Edgar Allan Poe films, Roger Corman took short stories by the great Gothic master and expanded them into full-length features. Here, by contrast, the stories stay short, the only other thing they have in common being the participation of Vincent Price. In 'Morelia', Price plays a tormented man forced to confront a dark family secret when his long-estranged daughter tracks him down. In 'The Black Cat', he's the rakish lover of the wife of Peter Lorre, who naturally plots a deadly revenge. And in the title role of 'The Facts in the Case of M.
Valdemar', he tries to relieve chronic pain by asking Basil Rathbone to hypnotise him, something that leaves poor Valdemar hovering on the border between the dead and the living. Corman's previous Poe films were played completely straight, and parts of Tales of Terror are as authentically creepy as any of them. But he also stirred comedy into the Poe brew for the first time, particularly in the scenes between Price and Lorre.
Actors:
Vincent Price, Maggie Pierce, Leona Gage, Peter Lorre, Joyce Jameson, Basil Rathbone, Debra Paget, David Frankham, Lennie Weinrib, Wally Campo, Alan DeWitt, John Hackett, Edmund Cobb, Scott Brown
Directors:
Roger Corman
Producers:
Roger Corman
Writers:
Richard Matheson, Edgar Allan Poe
Studio:
MGM
Genres:
Horror

Reviews (1) of Tales of Terror

This horror trilogy has precisely the same strengths and weaknesses of both almost everything in Roger Corman's Poe franchise, and the numerous other anthology films made around the same time, mostly by Hammer's rival Amicus. Its biggest strength is the always dependable Vincent Price, who, though not the world's most versatile actor, shows off his full range here in triple rôles as a tormented drunken slob who, in contrast to Price's usual performances, is almost totally charmless and looks genuinely dissolute, a camp dandy who overacts outrageously, and a very nice old man (almost a preview of Edward Scissorhands' "father") who, when the chips are down, gets very nasty indeed.

The first story is almost plotless Poe-by-numbers - a miserable drunk lives alone in an old dark house, obsessively in love with the corpse of a wife who won't stay dead. Price is very good - he even somehow looks puffier in the face than at other times in the same film - but there isn't really a story. And when the house inevitably burns down, you'll greet as an old friend that stock footage of a blazing barn that appears in every film Roger Corman ever made in which a house burns down.

The second part is the bit which tries to be funny. There's always one of those, and you always wish there wasn't. However, it's far better than the usual comic relief in anthology films, due to the double act of Peter Lorre, who unfortunately overdoes the drunk acting because everybody always does, and Vincent Price, who is great fun as the most pretentious wine-taster ever. Even the cat's quite good, considering that there's no such thing as a cat who can act, or has the slightest desire to try to (and this cat's facial expression suggests that he has less intention of hiding his contempt for the entire movie industry than is usual even for a cat in a movie). And it doesn't make the mistake of forgetting that people ought to die in nasty ways in all segments of a compilation horror film, whether they're supposed to be funny or not.

The third and final part is again almost plotless, but gets away with it thanks to a splendidly boo-hiss performance from Basil Rathbone as by far the nastiest person in the film (Vincent Price somehow plays three different characters without ever being the bad guy), and a nice bit of horror that gives you a rare chance to see Price in heavy gross-out makeup. But overall, it has to be said that this is a middling effort with some very primitive special effects, and a distinct lack of scares - if it was reclassified today, it would definitely be a 12 rather than a 15. Still, I bet it's the only film ever made whose credits include special advisors for both hypnotism and wine-tasting.