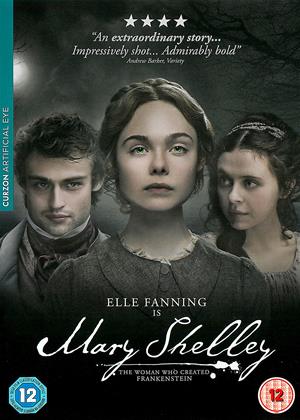 Whether this accurately represents the actual life and motivations of the people involved, or genuinely presents any insight into Mary Shelley's intentions as to how her novel was to be perceived appears to bother some viewers of this film, for me, it is an entertaining period drama that was an enjoyable watch.

The author of Frankenstein gets the full period prestige treatment, with manicured sets, plinky-plonk piano on the soundtrack and stilted dialogue. “How are we to write if we are forced to tend to domestic mundanities,” poor Percy Shelley is made to say. Elle Fanning nails an English accent, but it’s as though all the actors have had the life sucked out of them.

It’s well-mounted and competent, but this should be a fascinating story of a 16yo girl’s burgeoning passion for Shelley, life and literature, and passion is conspicuous by its absence. The writing of Frankenstein comes too little, too late and laden with a modern-day feminist twist (as does the boorish portrayal of Shelley and Byron). The decadence of the Geneva summer when the book was conceived gets an unconvincing U-certificate portrayal that never convinces. Ken Russell’s OTT 1986 film “Gothic” was surely nearer the mark. If only the actors could have been allowed to show some of the animation they show in the interviews on the DVD Extras.

How true it all is, I know not. However I found this film to be a very powerful drama, and I certainly felt the pain and despair of the lead character, Mary Goodwin, later to marry and become Mary Shelly.

The extras were also interesting, and reminded me of how powerful writing can be as a form of therapy to offload ones stuff.