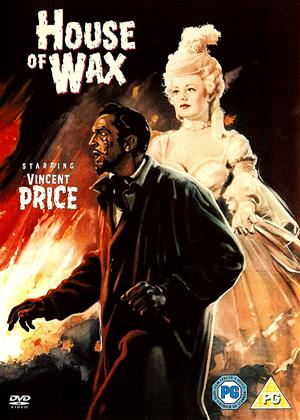 Reviews (1) of House of Wax

This film is chiefly notable for two things: establishing Vincent Price as an A-list horror star, and overdoing 3D to such an extent that one scene, involving a paddle-ball toy, gave several lucky cinema-goers detached retinas! Unfortunately it's not a particularly good film. The direction often seems listless, perhaps because of the extra size and weight of the 3D cameras, and Price, though he's very believable as a weirdly polite madman who combines creepiness with charm, is absent from large stretches of the movie, and doesn't really do all that much except at the beginning and end. The middle section is overlong and not terribly interesting, being more concerned with finding excuses for irrelevant objects to loom out of the screen than thrilling or horrifying us. Though we do get to see an unknown actor called Charles Buchinsky, who would later change his surname to Bronson, playing a deaf mute called Igor.

Some of the problems result from the omission of important elements in the 1933 film "The Mystery Of The Wax Museum", of which this is a remake, and which is included in its entirety as an extraordinarily generous DVD extra. In particular, the earlier movie is completely dominated by Glenda Farrell's hyperactive wisecracking girl reporter, whose character is absent from the 1953 version, no doubt because she doesn't behave at all like a good girl should. Instead, we get Phyllis Kirk having to double up as the damsel in distress played by Fay Wray in 1933 and the plucky young lady who finds the vital clue without misbehaving the way her predecessor did, which of course means that she's nowhere near as much fun.

The earlier version, despite being filmed using a very odd and short-lived process meaning that it's almost in color but not quite (or perhaps because of that), has a far weirder atmosphere, some nice sets obviously influenced by German Expressionism, and although the 1953 film actually has several action scenes the earlier one doesn't, the 1933 version seems much livelier and far more tightly edited, even though it's only seven minutes shorter. It's also grittier in some respects. The police are casually brutal and corrupt, the female lead drinks, swears, and attends autopsies, and the character who in the remake is an alcoholic is a junkie. Lionel Atwill as the mad sculptor isn't a patch on Vincent Price, but you can't have everything. And it's very nice to get a whole extra movie you weren't expecting, especially as it's arguably better than the main attraction.