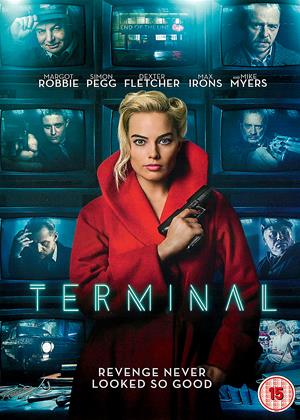 Margot Robbie, Simon Pegg, Dexter Fletcher & Mike Myers are all good actors - so why be in this film?!

Its weak with a minimal plot and has limited appeal.

its a lame film-noir with snappy dialogue a la Guy Ritchie; don't invest any time on this one folks. its about as interesting as a Brexit debate at 4am on C5.

Must-watch for aspiring screenwriters and directors - Terminal review by JR

Aspiring professionals, myself included, often wish they could see what a film would look like without pro structure, dialogue and plot. This is an amazing example. I don't think I have ever seen a movie of first draft-quality typing (not writing, that's different) up on the screen for an entire movie. So scene after scene of meh, with zero characterisation or emotion or plot, just rolls out in front of you. Yes, you will see how plot twists can't work if you haven't put the structure in. Yes, you will see respectable actors unable to give shape to your ramblings. Yes, you will see how a world has be constructed carefully for a film to sustain any interest. Writers - this is what your crappy first draft that you hug to your bosom would actually look like.

Directors - employ proper writers. Watch this and you will realise you cannot do it (or you are highly unusual if you can) while you should be concentrating on the other stuff. Proof of that is the hi-end advert-style visuals of this film that might look great, but are equally inert because they have no relationship with the story, whatever that might be. This director cannot write, or even worse really, he can hear in his head what the dialogue is supposed to be achieving, but does not know how to convey that to his stellar cast - and who wouldn't be intimidated by working with that lot?

So this is well worth a look. It'll spur you to do a proper job, whilst also making you feel your own stuff is Shakespeare by comparison. An additionally painfully instructive thing you can pick up from the DVD extras is to watch the actor who is also part of the prodco having to spout the most awful whoppers in defence of the rubbish they've all just invested months of their lives in. Certainly shakes my faith in their credibility.

To close - the director is completing his next movie for release as I type. So am I right, or is he, or is there even a question? He's got his films out there, I haven't. I'm supposing Hollywood saw the names he'd worked with and then took the precaution of making him shoot someone else's script. Maybe that's a combo that'll work. Hope so.

Meanwhile, have a feast, writers and directors. One of the most agonisingly instructive movies I've ever seen.

Have to agree with the earlier reviewer - I chose this on the strength of the cast, all of who were wasted on this low budget boreathon.

It Almost was Terminal! - Terminal review by lat002

Absolute rubbish. I wish I'd read the previous reviews and not wasted time trying to watch this.

Have agree with the other reviews, thought I would give this a watch due to the cast.

Very slow, lacking in any action, going round in circles with nothing really happen.

Like others... Attracted to this film by the cast. It's terrible. Generic whilst having non of the appeal of the noir genre. Avoid avoid avoid.

The case for the defence - Terminal review by RL

This is a Noir/Art movie. That alone should let you know whether it’s for you or not. If you want a straight thriller be guided by the other reviews and avoid.

However I found it stylish and blackly amusing with a witty script and that clearly attracted the great cast. It’s visual feast and above all else manages to be novel in a time when so much is formulaic and safe. Plus I found it genuinely enjoyable.

I know it has amazingly talented and great people involved in it but it's a horrible awful waste of time.

It just tries waaaaaaay to hard to be a comic book classic and falls woefully short. It's just soooooo bad.

If you like to see Margot Robbie looking fabulous in various outfits then I can only recommend watching it on mute.

Do not waste your time - Terminal review by RB

The movie is very poor, lacking any real plot, acting is poor & hardly any action scenes. I would not waste your time or cinema paridiso credit on the movie. Im watching it now and I have lost all interest