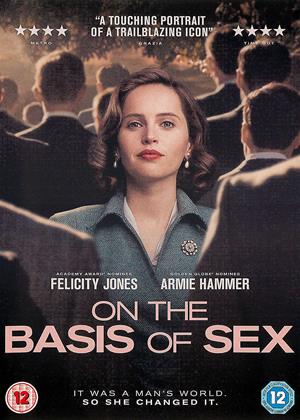 Rent other films like On the Basis of Sex

Reviews (1) of On the Basis of Sex

The story of Ruth Ginsberg is a very interesting one, having not watched the recent documentary I knew very little about her but found her grit & determination to be quite inspirational.  The performances are very good throughout but the problem is that the direction is pretty much point the camera without any flourishes or flair. I will watch the documentary as the story was interesting.

On the Basis of Sex review by Mark McPherson - Cinema Paradiso

Ruth Bader Ginsburg finally gets the movie she deserves, even if it has to bolster its cries of sexism in big, bold letters with the same volume as a period piece on soft racism. The enemies of RBG are simple to pin down. She was a trailblazer as a woman desiring to be a lawyer in a culture dominated by men. There are many who would argue that she is barking up the wrong tree in trying to strive for women’s rights, that the law for discriminating against women isn’t an issue because, hey, women don’t have to work! Sweet deal, right? Except I’m now hearing this argument echoed again in the toxic discourse on this issue so this seems less like a look-how-far-we’ve-come film and more of a film about women’s rights that are still being fought.

Felicity Jones plays RBG from the beginning, showing her first steps into college during the 1960s. Even with a kid, she still finds the time to not only do her own law homework but help her ailing husband Martin (Armie Hammer) as well in the same field. What a team! Of course, it’s easy to have that kind of gender cooperation within the household and another thing when it comes to a career. Finding little in terms of being an attorney, Ruth settles for being a professor. Perhaps she can still do good from such a position.

And, as it turns out, she does! She is inspired by the 1970s women who are ready for more rights and pumped to get things moving. Her daughter is also getting more rebellious in the most intriguing way, arguing with her mother over the legal morality of Atticus Finch. Ruth then finds a juicy case; one that wouldn’t be an expected one she’d stick up for. A bachelor struggles to help his ill mother at home and is discriminated against for his working situation on the basis of sex. Yes, men discrimination. RBG is in this fight all around for the discrimination of men and women for any position. And off to the races she goes, facing off against aged white guys who feel she is being too rapidly.

This is a rather unique film in which the woman in question is facing a problem more of philosophy and law than personal issues. Even her arguments with her daughter seem to be more about the motivation of ideals than a general disconnect. The film maintains a sharp focus on the trial at hand and the rights on the line. You’ll get a few expected moments, sure. When Martin is stricken with testicular cancer, it’s delivered in a charming scene turning dark and the bad news divulged in the hospital. When Ruth is studying up for her next trial, it’s a late-night session of sifting through papers and practicing debate strategies. And you better believe there are some juicy courtroom scenes where Jones gets to rock that monologue.

On the Basis of Sex is a most exhilarating experience in how it never loses sight of what the film is trying to say, trimming all the fat of subplots that are either minor or not worth the running time. There are a handful of scenes delivered in the easiest context of realizing who is on the wrong side of history. But it’s unique, I think, how much of it reflects now. The talking points made against RBG in the film are the same we hear today, arguing that women are more comfortable with segregation than without. Making this problem more evident is the stellar ending that transitions into the present with the real Ruth Bader Ginsburg. She’s still here and still fighting, proving this fight is far from over.