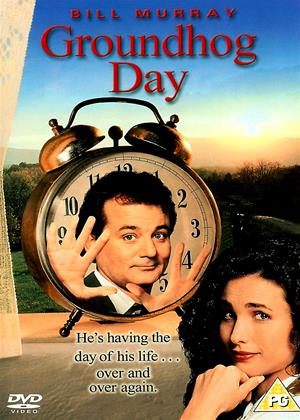 I consider Groundhog Day of its genre (feel-good romantic comedies) to be right up there with old greats such as 'His Girl Friday', 'Adam's Rib' etc... Danny Rubin's & Harold Ramis' witty and intelligent script (despite many improbabilities) keeps the pace of the film going like a train for it's 1 hour 40 minute run-time. Bill Murray steals the show with a stellar, career-topping performance. This is undisputably the best film he has ever acted in, as it exploits fully his abilities as a comedic performer. The rest of the cast is solid through out. This is my personal favourite film of its genre (feel-good, romantic, comedy) by far!! I find the majority of this genre of Hollywood movies to be sickly sweet, corny, tiresome, unoriginal, inferior rehashing of old classics. But I think this film breaks the mould; due to its superb script & perfect performance from Murray! If you haven't already seen it; I strongly urge you to do so IMMEDIATELY!!!!

Original Romatic Comedy (don't get too many of these!) - Groundhog Day review by CP Customer

Groundhog day has got to be a classic film and one of the best films that Bill Murray has ever starred in. The concept of the film is great, it's hard to get tired of it as you can watch it over and over again.. it's cold out there.. Phil? Phil Conners? is that you?...

Bill Murray is not having a great day.

He's been stabbed, shocked, poisoned, frozen, hung, electrocuted and burned. On the plus side, he can eat and drink anything he likes without putting on the pounds; get thrown in jail without fear of suffering a life sentence and bed just about any woman he fancies without having to worry about that morning after feeling.

You see Bill is stuck in a time loop and the results in Groundhog Day make for one of the funniest and most poignant comedies in history.

Well that's probably down to the fact that the Bafta-winning script by Danny Rubin and direction by Harold Ramis lends itself to repeated viewings.

As weatherman Phil Connors, Murray endures - and enjoys - the same day over and over while reporting on the genuine and bizarre ceremony in Pennsylvania.

This was not the first time Murray had starred in a winter's tale of a greedy man shown the error of his ways through a seasonal miracle.

In 1988, he headlined the big budget Scrooged, an enjoyably over-the-top updating of A Christmas Carol. However, while that movie rammed the 'love thy neighbour' message down your throat, Groundhog Day is far more subtle in its approach.

Treating the audience with a degree of respect rare in US comedies, this assumes you get the gag straight away and then moves on.

Connors may be a cynical, jaded old celebrity with delusions of grandeur but there's a bright spark of humanity in him that is eventually revealed through his stay in Punxsatawney.

Every morning is the same. He awakes in his cosy guest house bed at 6am to the sound of Sonny and Cher's I Got You Babe; he goes off to report on the festivities and by the time he goes to bed that night, the whole thing starts over again.

His attempts to seduce producer Rita (Andie MacDowell); his contempt for cameraman Larry (Chris Elliot) and in fact all of the inhabitants of this little town, reveal the fact that Phil Connors represents the selfish side of all of us.

As the time loop works its magic, Phil starts exploiting the conundrum for his own ends, seducing the town's babes; pinching money from dim-witted security guards and exploiting the situation for all it's worth.

When Rita resists his charms, Connors makes it his goal to win her over - even if it means living through several days of the same events in order to glean that vital bit of information which might lure her into bed.

Aside from men who will change 'poopy diapers' and can play a musical instrument, she likes French poetry - to which he laughs: "What a waste of time!"

The next day it doesn't take much for Phil to wax lyrical over a Gallic Bard - much to Rita's amazement.

Part of the beauty of this movie is the fact that Murray may be caught in a time loop but writer and director don't feel the need to explain how or why this works. It just does.

As the movie progresses, Connors realises that every day will be the same and that exploiting the predicament for his own ends just leads to misery and depression.

So he takes up piano lessons, ice sculpture and starts running round doing errands for the town's population.

On paper, such selfless acts could leave some viewers with a cavity but Murray's well worn face make you believe this is a man destined to spend eternity living the same day over and over.

Stuck in a time loop in a small town in upstate Pennsylvania, TV weatherman Phil Connors (Bill Murray) is doomed to re-live the same February day over and over and over again. How long? Seems to be 10 years+ of the same old, same old day, with the same old local characters – until he knows them, and himself, inside out. Despite the science fiction scenario, the film is a laugh-out-loud funny romance with Andie McDowell providing the love interest. Perhaps I've had a groundhog day experience too – I've seen the film many times now and it still makes me laugh. Great stuff – 5/5 stars. [Aside: Yes, Groundhog Day exists, Punxutawney exists (although the movie wasn't filmed there), and yes, the USA has some very strange customs...]

I watched this again after nearly twenty years, and considering it's a film in which the main character gets stuck in a time warp, I'm pleased to say it's still as good as it was all those years ago - truly a film that has not dated, and which comes across fresh and engaging even when you know the whole story. No need for details, other than great plot, great script, great performances = a classic.