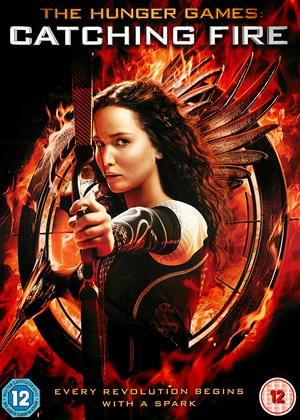 Rent other films like The Hunger Games: Catching Fire

Excellent sequel to the Hunger Games with Katniss as feisty and fabulous as ever. Lovely twist too.

If you enjoyed the first film you'll not be disappointed by this. Must watch

Excellent sequel to the Hunger Games with Katniss as feisty and fabulous as ever. Lovely twist too.

If you enjoyed the first film you'll not be disappointed by this. Must watch

Following on from the events of the first film, The Hunger Games: Catching Fire proceeds to do the exact same things as its predecessor but it a way that takes all the life and meaning out of the murderous competition and leaves viewers with an empty tale of resistance and murder.

The film follows what happens when Katniss (A scenery chewing Jennifer Lawrence) returns to her home of District 12 after winning The Hunger Games with fellow victor Peeta (Josh Hutcherson). Upon her return she finds a different world than the one she left as President Snow (Donald Sutherland) sets out to undo the rebellion that Katniss has started as he plans a new surprise involving the 75th annual Hunger Games.

In the interim between these two features nothing has really changed about the world Katniss lives in, it’s still a bleak, dank place filled with starvation and malcontent led by a dictatorial Capital. However while the first film featured some excellent if overworked social commentary,

Catching Fire mishandles its story so much that the shades of grey on offer in this world of heroics and murder are nowhere to be found as Katniss goes full hero for the sake of her friends and family.

Well filmed and directed by Francis Lawrence, the action plays well but the films story lacks the benefit of common sense. The titular Hunger Games becomes a n exercise in spotting plot holes as people proceed to die for the sake of the story instead of as a natural extension of the films tale.

Filled with clichés and featuring one of the worst Jennifer Lawrence performances of her career,

Catching Fire makes its predecessor look like a masterpiece by comparison. The magic of this world is lost in the shuffle of plot points and new character introductions as we start to wonder what the point of this overstuffed epic really is