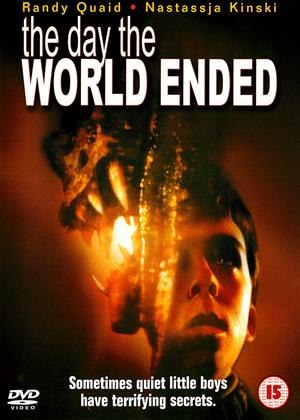 Rent other films like The Day the World Ended

Sign up
The Living Dead at the Manchester Morgue

Reviews (1) of The Day the World Ended

Spoilers follow ... - The Day the World Ended review by NP

‘I’m your Princi-pal!’ screams the poster on the school wall. Next to it, Santa flashes a winning cardboard smile. Such cheeriness is in otherwise woefully short supply in the ‘small American town’ where Dr. Jenniffer Stillman has started her job as school therapist. Stillman is played by Nastassja Kinski, who is utterly wonderful – and very patient, for most of her new co-workers appear, on first meetings, to be ignorant bullies.

The local town doctor’s son Benjamin James McCann (Bobby Edner) is the victim of frequent mistreatment from both pupils and teachers. He’s transfixed by sci-fi and horror and appears top exhibit increasing telepathic powers. An adopted child, the impression given is that Ben is waiting for his real ‘alien’ father to come and take him away.

When the more boisterous idiots that make up the town end up being killed by a dripping, tentacle creature, it seems likely that what Ben is saying just may be true. In true ‘Salems Lot’ style, we are treated to the indiscretions of otherwise ‘respectable’ townsfolk that are paled into insignificance when compared to the new threat. Inevitably, those same respectable townsfolk rise up, furious, and take their guns, comb the land, shouting, ‘find this thing … and kill it!’

It is hard not to side with the alien in the woods, dripping and tentacled though he is. Possibly the film-makers thought so too because the ending is a satisfying one. ‘The Day the World Ended’ is an ambitious title for what is a TV movie whose style could slot easily into the schedules at any time since the mid-1980’s. Whilst Kinski is rather better than the material given her, this is enjoyable, if mainly mild stuff, with the very occasional expletive or moment of gore thrown in.