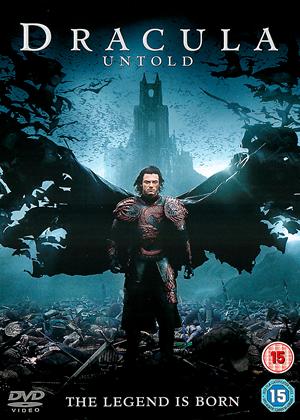 I loved the perspective! - Dracula Untold review by MU

Good effects, great acting and an excellent plot! I loved every moment of this film. It didn't fail to live up to my expectations as an avid fan of the original Bram Stoker. I didn't expect to become so engrossed- I particularly enjoyed the way Dracula was successfully portrayed in a new light. Clever and nostalgic ending too.

It turns out that Prince Vlad (aka Dracula) was actually a nice guy who became a vampire simply to gain the strength to lead his motley band of Transylvanians against the superior Austrian army. Who knew? This is a crossover movie that wants to be an epic but is in fact a load of tosh. There's even a 'brothers' backstory between Vlad (an underwhelming Luke Evans) and the Austrian commander (an underused Dominic Cooper), which rips off the Judah/Messala dynamic from Ben-Hur.

It's all so earnest and downbeat, with unexciting cgi battle scenes and a generic orchestral score that puts a damper on everything. Even worse, we have to sit through lashings of boring melodrama as a simpering Vlad deals with his psychological demons. Nice ending, though, and this sort of thing CAN work. Check out the wonderful Abraham Lincoln, Vampire Slayer, where Dominic Cooper really gets to do his stuff.

The premise of the film is not new. Well acted but not really scary. You feel sympathy for dracula. Watchable but now omg moments bit tame and banal for my liking

Vampire films are almost always being released, each giving a different idea as to what a vampire would be like. Some portray it as an illness or curse, others a physical creature, and some even as a romantic figure. Dracula Untold brilliantly brings back the fearful creature we know this famed vampire to be, and is a film you’ll want to watch again and again.

When his pride, kingdom, and family are threatened, Prince Vlad is determined to defeat the enemy. He makes the difficult choice, and becomes the villain to be the hero. And the rest...is history.

There are so many reasons why this film is great. Firstly: the acting. For the most part, I prefer to watch TV shows and films where I’m not particularly familiar with the cast. While I love seeing my favourite actors get work, it helps me to enter the new world by not recognising the characters as whoever I have seen them playing previously. This cast also created a dramatic atmosphere. This is a good thing, because even though a story about vampires is clearly false, they still managed to make the audience feel for the characters. To break up this drama, the smaller moments of comedy were excellent, not turning the film into something silly, but showing the multiple layers of the characters.

Vampire stories have been told so many times and in so many different ways across assorted mediums, and yet, just from watching the trailer, I could tell this was going to be different. It was a very cool way of portraying vampires again, that have slipped from being scary creatures/villains, to romantic figures. As a fan of Buffy the Vampire Slayer and not Twilight, I appreciate this resurgence of the vampire-as-villain element. The story also reminded me a lot of Abraham Lincoln: Vampire Hunter, which I also loved. The mix of history with fantasy is an awesome thing if done right, and Dracula Untold definitely did that.

With the advancement of technology, films can no longer get away with bad visual effects. The good thing for this film, is that its designers were amazing, therefore making the visual effects just as good.

For the most part, reviews haven’t been too good. While there are some that see and love all of the points that I did, there are others that wanted more; though I don’t know what they were exactly wanting.

The two-hour runtime just flew past, and I was mesmerised by the visual effects, action, acting, and story the entire time. I honestly didn’t know what was going to happen next, and that’s something that I look for in a film.

It’s also interesting to note that this film is slated to become part of the ‘Universal Monster’ franchise, which is a reboot of all these classic monsters, with The Mummy rumoured to come shortly.

All in all, this is definitely a film to add to your collection.