Rent The Living Dead at the Manchester Morgue (1974) 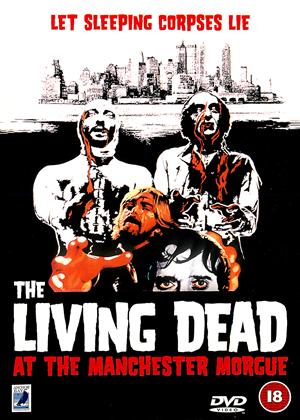 Rent other films like The Living Dead at the Manchester Morgue

Reviews (2) of The Living Dead at the Manchester Morgue

Why hadn't I heard about this zombie flick before? - The Living Dead at the Manchester Morgue review by RP

Why hadn't I heard about this zombie flick before? It's probably not the first zombie film you might think of (that's if you've heard of it at all) but it is a rather good example of its genre, slow and atmospheric, reasonably well scripted, and a few classic shambling, entrail eating zombies. And although there's not much gore, what there is nicely gruesome :)

Made in 1974 - so its about 40 years old. The sequences under the opening titles show shots of 1970s Manchester and assorted residents in clothes of the day, but other than the lead character's over-long hair and 1970s dress sense and a few cars of the period it doesn't seem outdated. That's because, despite the title, there isn't much of Manchester in it - it's set in fictional Southgate, supposedly a village in the Lake District.

This is a Spanish-Italian production so the fact that it's set in England is a bit unusual. I assume the non-English actors' lines were dubbed in post production...

The story goes like this: George is on his way to Windermere on his Norton (without a helmet) when Edna in her mini damages his bike. They team up and head for her destination of Southgate, where it turns out that an experimental agricultural insect-killing machine using 'ultra sonic radiation' is waking the dead. There are assorted encounters with zombies, no-one believes them (of course), they are suspected by a cop with a bad US-Irish accent of being drug crazed murdering hippies, and there is a final zombie sequence in a hospital with a final (fairly obvious) twist at the end.

For me, the most fascinating thing is the filming locations - it was mostly shot in and around Castleton in the Peak District with a bit of Dovedale thrown in, all places that I know well and recognise. For more info on this look here:

Spoilers follow ... - The Living Dead at the Manchester Morgue review by NP

Following George A. Romero’s ground-breaking ‘Night of the Living Dead (1968)’, a whole new style of horror films arrived. This Italian/Spanish project, in which the title alone gives away its inspiration, is one of the best zombie follow-ups, notorious not least because of its array of titles (including ‘Don’t Open the Window’ and ‘Let Sleeping Corpses Lie’).

The main hero, the fairly objectionable George (Ray Lovelock) seems self-dubbed, and sounding like he is doing a Michael Caine impression. Edna (Christine Galbo) accidently backs her car into George’s motorbike and he has to wait a few days while it is repaired. This means she is then lumbered with his company as she visits her sister Katie (Jeannine Mestre), a struggling drug addict and husband Martin (José Lifante), who becomes the first victim of an apparently reanimated corpse.

Galbo is excellent as Edna, who stoically puts up with George’s over-bearing chauvinism (SPOILER – her final scene, in which she is newly ‘turned’ and left to burn, dead-eyed and uncomprehending, her hand held out despairingly to George, is tremendous). Yet George, for all his flaws, makes a captivating and solid lead, especially when pitted against the prejudiced police sergeant (an excellent Arthur Kennedy) – who might seem to spend his time telling everyone his force ‘aren’t as stupid as you seem to think’, but with every utterance, appears to prove that, if anything, the claims are over generous.

There are several nicely gruesome, gory moments and a genuine atmosphere of ghoulish jeopardy here, and the pace really builds towards a series of climactic highpoints. Having carefully built-up the growing conflagration involving deadly pesticides, an idiotic police force and a rapidly growing zombie community, the pay-off is splendidly grim. The first zombie is a dead ringer for actor Harry Dean Stanton, but he is soon joined by several others. Their number might be axed or burnt by the resolute heroes, but there are always more to take their place.

Jorge Grau directs wonderfully. Filmed in Rome and Madrid, with extensive footage shot in Manchester (including a young lady streaking through the traffic in front of Manchester Cathedral, where no-one takes any notice), many scenes create a terrific snapshot of Britain in the early 1970s, whilst creating a world of living dead, squalid police stations and grainy hospitals. The musical score by Giuliano Sorgini is nicely minimalist and subtly sinister. Apart from the wonderful title, ‘The Living Dead at the Manchester Morgue’ is a masterclass of growing horror and comes strongly recommended.