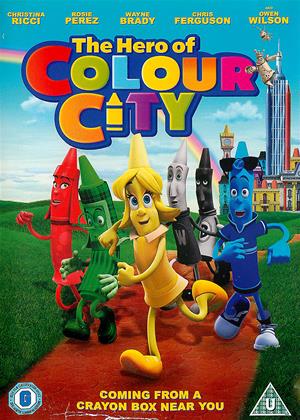 Rent other films like The Hero of Color City

Sign up
Scooby-Doo and Batman: The Brave and the Bold

Sign up
The Lion Guard: The Rise of Scar

Sign up
Norm of the North: Keys to the Kingdom

Reviews of The Hero of Color City

The concept of Toy Story worked so well because of the attachment and imagination that children form for their own toys. I highly doubt they share that same vision for their crayons. Even the smallest of preschoolers see them as no more than instruments for creative illustrations. Maybe my imagination just wasn’t as strong as a child, but I never had any imaginary visions of crayons existing as their own society within my box of assorted color. Perhaps today’s kids have a heightened sense of creativity for assigning personality to inanimate objects. Or the filmmakers are just that disconnected from the imagination of children.

The crayons of a child’s room apparently all sprout arms, legs, mouths, eyes and accessories when the lights go out. Every crayon’s personality and character is entirely defined by their color. Yellow (Christina Ricci) is fearful, Red (Rosie Perez) is bold, Blue (Wayne Brady) is cool, Green (Jess Harnell) is organized, Black is always depressed and White is anxious about never being used. I’m rather confused as to why White is so sad about never being used by the child. Wouldn’t that mean he lives the longest of the crayons that are more worn down into nothing? Or do the crayons actually welcome their demise feeling they’ve served a purpose in life? Is White’s real fear that he doesn’t want to die alone?

These are all questions that are never answered since this is supposed to be a bright and cheery picture for the young ones. When night falls, the crayons all retreat to Color City which is magically accessed via the crayon box. They don’t do too much in this town besides milling about, sharing tales of the latest pictures they’ve been used to draw. Most of them congregate at the spa to be refreshed with baths and haircuts (or sharpening?), except for White who is shunned for being so useless. He’ll have a chance to prove himself, but the film is more about Yellow and conquering her nature of fear.

The crayons are not the only thing that comes to life at night. Scribbled drawings take shape off the paper and follow the crayons into their hidden city. These new creations of the child desire one thing from Color City: color (what else?). Eager for a change in his appearance, a large scribble of a king hits the source of the color in the city, a waterfall of hues. But since the color doesn’t last long, he decides to block the falls to horde the color all for himself. Doing so causes all the crayons in Color City to become dull, losing their color shade by shade until there is nothing. The primary cast is then sent on a journey to stop the king through various avenues of other scribbles and drawing themed dangers. Why couldn’t the scribble just communicate with the crayons to be colored in? He has no mouth with his only voice being through a chatty companion sketch voiced by Craig Ferguson.

The animation is very cheap with few textures, but I must admit the character designs are not too shabby for such a budget. Perhaps that’s just because I don’t have much of a comparison for sentient crayons in a computer animated film. By default, the movie is the best looking animated film entirely about crayons. Outside of that, there isn’t much to boast about with this script. It’s purposefully left harmless and overly simplistic in delivering its blunt message about individuality. But there’s just such a huge disconnect for a story like this given how the kid doesn’t play a role in any of this. Films about sentient objects that have no business talking only succeed in one of two ways; involve a human element that plays heavily into the story (The Brave Little Toaster) or just do away with humans altogether (Cars). Color City just can’t find a way to function without adding in the child for its premise, but never makes an attempt to throw him into the plot. The movie is too busy forcing a lackluster adventure and cramming in as many forgettable music numbers as possible.

Your average preschooler scribbling on paper has better creativity than the flimsy premise of The Hero of Color City. It is entertainment just as disposable as its characters who are easily replaceable. Do you think any kid actually cares that deeply about his or her crayons losing their color? They’ll just toss them and grab some other crayons or markers or colored pencils (do they have their own Color City as well?). Are we supposed to feel bad that these crayons “die”? These are the stupid thoughts that reeled through my head after witnessing a 70 minute movie that couldn’t even hold its own if it were 7 minutes. Perhaps the world just isn't ready yet for a movie about sentient crayons.