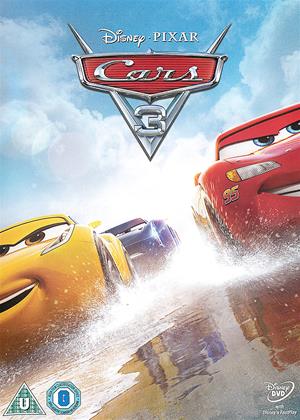 The first two films in this trilogy were brilliant and a well deserved success. This third in the series though has clearly lost its way and rather than being a film about the main character, becomes yet another yawn fest catering to the PC crowd! I found the film very slow to develop and kept losing my attention. The plot is paper thin and very predictable and I worked out what was going to happen as soon as the new main character appeared. The first half is very slow and centres on Lightning McQueen's fading career as younger newer models superseded him. Trying to make parallels with real life and failing miserably. Until Cruz Ramirez, a female version of himself, comes onto the scene and he is inspired to work with her. This comes across as less inspirational and more about girl power and pandering to the feminist brigade, than it does about being yourself and believing that you can overcome obstacles! Sadly the ending gives the impression that the real purpose of this plot is to set up for a new series featuring a female version of McQueen in the guise of Ramirez. It's really annoying that nowadays every big blockbuster simply has to set itself up for the next instalment instead of simply being a good film in itself, so in the end this comes across more like a Marvel comic book than a solid film in its own right. Even the kids said it was boring, so that's saying something!

Should have left it as the 2 films. Pixar can do better........maybe should go back to the toaster and angle poise again?

As the last movie in the Cars trilogy, I hope, the series finds itself going out with a disappointed sigh of a sports drama. I’ve seen this story repeated not only in a countless array of sports pictures, but even within this very franchise. It’s not that there isn’t some heart or character to this familiar tale, which takes aim at such emotional subjects of getting old, passing the torch and female empowerment. But considering how long Pixar has stuck with this series, they haven’t attained the character to make me care about these cars, nor the building of this world to make me not question it.

I was usually distracted enough by the story and creativity of past Cars movies to never read too much into this world and drive myself insane. This is not the case with Cars 3 as it addresses a subject that is never fully explained. Hotshot racer Lightning McQueen (Owen Wilson) finds himself more alone than ever on the track. His mentor of Doc Hudson (Paul Newman) has passed away, but how? Where do cars go when their meter runs out? Do they proceed to a funeral home style junkyard or have their parts donated? Anyway, McQueen soon discovers that a new generation of slick racers are overtaking his old racing buddies. Competitors he once made cheerful jabs at are now retiring because they can’t keep with these new kids and their fancy new parts.

But, wait, where did these new racers come from? If they have fancy new parts, why can’t McQueen replace his own? This is apparently some unspoken aspect of the Cars world that automobiles are built with what they have for life. I hate to keep harping on this, but these are really very basic questions that the usually detail oriented Pixar studio asks and answers so we don’t have to. They need to be smarter so I don’t find myself looking at the cow tractors and try to fathom whether they use them to eat for their parts or milk them for oil. Even Blue Sky’s Robots, as manic and ridiculous as it was, still found a clever way to explain birth and death with inorganic life.

Since replacement parts are out of the question for an unexplained reason, McQueen finds himself with a new sponsor (Nathan Fillion) willing to train him. Yes, if a car isn’t fast enough or precise enough on the track, it’s all a matter of working out. This is a typical route for a sports movie, but in a world of cars? How important is it for a car to have meditation and workout on a treadmill?

If you can glaze over all these ill thought concepts, there’s a decent mentor arc here. McQueen is trained by Cruz, a perky trainer that knows everything about simulations and not much about racing outside of a gym. As McQueen takes Cruz out for some good old fashioned racing, he finds himself spending more time helping out Cruz than flexing his tires. You can see where this is going, especially in a scene where Cruz tearfully admits she never wanted to be a trainer and had dreams of becoming a racer. Her arc has a satisfying conclusion, but a little forced towards the climax which makes a statement so direct and overly sentimental it comes off as pandering. A great animated film can find a way to weave allegories, not smash them over the viewer’s head once all the hijinks are over.

The film is incredibly off in tone for, again, not defining its world very well. The moment where McQueen has a major crash on the track early in the film is the most shocking and tragic of scenes. But when McQueen later attends a demolition derby for training, where dozens of cars are smashed and disfigured, it’s treated more as a comical skirmish. Shouldn’t there be some danger and terror to such a scene? This makes the big opponent of this competition, a school bus with piercings and devil horns, seem more playful than tough. We’re supposed to like her, even though she rips off license plates to dangle off her windows. We’re supposed to hate McQueen’s rival of Jackson Storm (Armie Hammer) as the new punk on the scene who insults the old guard at every turn. But, wait, wasn’t McQueen the exact same way in the first movie? Couldn’t Jackson be taken under the wing of McQueen towards the end of the picture? Nope, he’s just a bad guy we’re supposed to hate and won’t develop anymore past being a jerk.

If Cars 3 was intended to be a farewell, it’s no Toy Story 3. The familiar cast of characters I suppose we’re meant to feel sentimental towards, from the buck-toothed Mater (Larry The Cable Guy) to the big rig Mack (John Ratzenberger), are mostly shoved to the side. McQueen’s journey to be a better racer finds him spending more time lamenting on the past than improving his future, to an almost depressing degree that only the most aged of audiences will be able to relate towards. And the humor, the most vindicating aspect of any animated film, is comprised almost entirely of car puns that should have been retired for this series. Pixar is too good of a studio to play it safe with their pictures and Cars 3 has strapped on the training wheels usually reserved for Dreamworks or Illumination. For a franchise that’s been around for eleven years, the rust has shown and the gas is reaching empty. The studio needs to retire this series, less it becomes the biggest crash and burn of the studio’s generally pristine legacy.