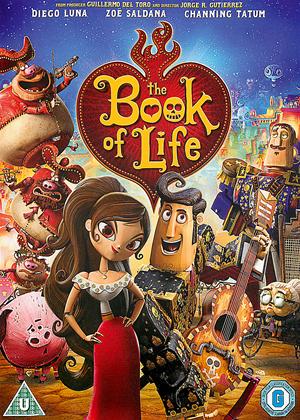 Reviews of The Book of Life

The Book of Life review by Michelle Sommerville - Cinema Paradiso

Not all animation films are for children, and The Book of Life is a prime example of this. It is a feel-good film that connects well with audience members of all ages. Based on the Mexican folklore of the ‘Day of the Dead’, which it was originally called, creator Jorge R. Gutierrez has expanded the story and transformed it into a must-see film.

The Book of Life begins like many other films: one girl, two boys, and friendships in jeopardy. But it gets worse. It is also the Mexican ‘Day of the Dead’ - or Halloween - and spirits are roaming the human world. Bent on causing mayhem, two spirits bet on which man Maria will choose. When it looks like the spirit Xibalba is about to lose, he conjures a snake to kill Manolo. What follows for Manolo is a three-fold adventure, through The Land of the Living, The Land of the Remembered, and The Land of the Forgotten, all with the hopes of returning home to his beloved Maria. Will Manolo make it home? And will Maria be the start of his happily ever after?

It is important to say first off, that none of this would have come about had it not been for the passion of Gutierrez. It was his imagination, enthusiasm, and clear talent that brought in Guillermo del Toro, the whole cast, and is what will entice the audience.

As a child of the 90s, I love nothing better than watching Aladdin, Beauty and the Beast, and Little Mermaid, et cetera, but I am excited to see the progression of animation. The Book of Life reminds me a lot of Coraline and The Nightmare Before Christmas, which made their films attractive in both story and animation to audiences of all ages.

Voice acting is much harder than standard acting because actors are unable to use their facial expressions and body language. The cast: Diego Luna, Channing Tatum, Zoë Saldana, Ice Cube, Ron Perlman, and Christina Applegate, to name a few, expertly embodied the characters and brought the animations to life.

This film’s animation is different to what we are used to seeing. Gutierrez has talked a lot about his love of ‘The Art of’ books that allow the public to see the original concept art for animation films. He has disliked how much the original art changes to the final product, and wanted to make a film that looked exactly like the original imaginings. He has done exactly that.

Please also note, with the theme being quite dark, parents and guardians might want to check it out before letting their little ones watch it.

The film has received very positive reviews by audiences and critics alike. Whether it will be a film like The Lion King that stands the tests of time, I kind of doubt it, but it is still a film worth watching.