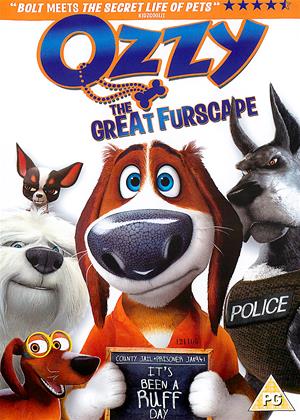 Synopsis:
Ozzy, a friendly beagle, has his idyllic life turned upside down when his family decide to leave for a holiday where no dogs are allowed! Unable to bring their beloved Ozzy along for the ride they settle on the next best thing, a top-of-the-line canine retreat called Blue Creek. This picture perfect place turns out to be a canine catastrophe constructed by it's villainous owner as a means to capture dogs. When Ozzy finds himself in this doggy disaster - a prison for dogs run by dogs - he knows he must come up with a plan to ensure he makes it home safely. Ozzy teams up with his new friends Chester, Fronky and Doc who join him on his adventure out of prison back home to his family.
Directors:
Alberto Rodríguez, Nacho La Casa
Producers:
Jeff Bell, Ibón Cormenzana, Nacho La Casa, Phyllis Laing, Ken Zorniak
Voiced By:
Guillermo Romero, Dani Rovira, Jose Mota, Michelle Jenner, Carlos Areces, Fernando Tejero, Luis Bajo, Héctor Cantolla, Juan Fernández, Elsa Pataky, Pablo Espinosa, Selu Nieto, Lorenzo Beteta, José Escobosa, David Hernán, Fermín Pintos, Ricardo Escobar, Roberto González, Roberto Encinas, Mario Martín Serrano
Writers:
Juan Ramón Ruiz de Somavía
Studio:
Signature Entertainment
Genres:
Children & Family, Kids’ TV

Ozzy is an animated film about a puppy, but let that not fool you into thinking that Ozzy is a feature about kids, because it’s certainly everything but that. In fact, Ozzy features some rather adult themes, and employs them well while we’re at it; this means that you can’t and shouldn’t hold any grudges against this film after you’ve seen it and expected something entirely different out of it, because I know for sure that many a viewers would do just that. And given that some (if not all) of the scenes would be appalling for the youngest members of the audience, make sure you’ve having a backup whilst renting/watching this one with the family.

The film builds a rather unique and interesting narrative, and for the most part, the story flows nicely and is quite entertaining to its very end. The animation is not Pixar-ready yet, but you can’t really take that as an argument and go with it against the film. Plus, the characters were fleshed out nicely, although a second draft about their unique traits wouldn’t have hurt the filmmakers to at least try. But, their personalities were different enough to prevent a mutiny in the theater, so I’ll let that one slide under the radar.

Now, a decent animation needs a good ensemble of voice actors to carry out the story, which Ozzy does have (both an ensemble and a story). One of the more surprising cast choices, not because he nails it right out of the ballpark or because he’s bad beyond all measure, is that of Rob Schneider voicing Vito. He’s just unrecognizable, which comes good for a change of the Schneider-isms we came to hate over the years of this actor’s downward spiral in his career. So, seeing him actually trying something new for a change is both enlightening and heartwarming and I wish this man the very best in whatever he chooses to do next.

Now, the negatives. Ozzy features lots of bodily fluid jokes which often fall flat on their faces once they’re told. I mean, it’s 2018 people, things like that are neither funny, nor warranted, nor needed anymore to elicit chuckles; audiences are smarter than that nowadays, so you’d really have to try more in order to impress, shock, or make someone laugh. Unfortunately, despite the decent story, Ozzy does neither of the three. Also, remember the adult themes as mentioned in the beginning of this review? Well, that’s all fine and dandy, but including straight-up bullying and verbal abuse into an animation about cute puppies (non-Watership Down level) is kind of a double-edged sword that, here, feels very out of place.

Finally, Ozzy can be watched, but make sure you’re not including the youngest members of your family prior to viewing this film.