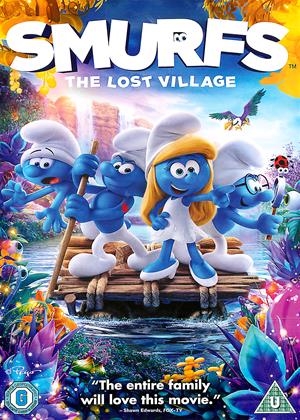 Reviews of Smurfs: The Lost Village

Smurfs: The Lost Village (aka Get Smurfy / The Smurfs 3) review by Mark McPherson - Cinema Paradiso

Smurfs fans can rejoice as Sony has finally delivered the faithful film they’ve been waiting for. This all-CGI adventure features a more loyal design of the iconic blue creatures, appearing closer to their 2D designs than the weird PlayDoh designs of the live-action hybrid movies. All the simple personalities feel on point, the magical forest feels fantastical and even Gargamel is presented as bumbling and threatening as he ever was. As far as movies based on TV cartoons go, The Lost Village is surprisingly true to its source material. This is both the film’s biggest strength and its weakest attribute.

I only caught the tail end of The Smurfs as a kid, but it never did anything for me. It was a simple enough tale of a blue community of miniature creatures trying to survive in a magical forest with an evil wizard trying to steal their magic. There was a certain allure to its premise to hold my attention for ten minutes, but never really stuck with me over time the way it did for older kids who had been watching the long-running series for almost a decade. The Lost Village feels very much like an extended episode from that series with its 10-minute story padded out into a 90-minute CGI adventure of expected musical numbers and simple slapstick chases.

To be fair, the movie does explore an aspect of The Smurfs that is interesting enough to explore. The only female among the Smurf village is Smurfette, existing as an infiltration spy created by the evil Gargamel turned good thanks to Papa Smurf’s unexplained magical powers. Every Smurf is labeled with their niche for their community, be it the intelligence of Brainy Smurf or the one-joke usage of Table-Eating Smurf. Smurfette, however, doesn’t have a specific function and it’s bothering her and the community. She could possibly serve the most important aspect of their race by acting as the only member that can bear children, but this is a kids movie. Instead, it’s discovered early on that Smurfette has the power to absorb magic. Great, so the movie is over now, right?

If only the Smurfs could recognize this talent and acknowledge Smurfette’s uniqueness, she wouldn’t find herself as preoccupied with discovering a race of female Smurfs in the forbidden area of the magical forest. In comes the expected story of Smurfette finding that she’s not the only female Smurf. There is in fact an entire village of female Smurfs and they’re all really smart, resourceful and combat ready. They can easily best the male Smurfs and are not bound by specific duties that they can function strong enough without designations. Yes, we get it, women are strong enough to do anything with their lives and not just be a stereotypical token woman. If you didn’t get that, don’t worry; the male Smurfs will stare directly into the camera and state the themes of this plot with the same bluntness of a PSA.

The evil wizard Gargamel is also seeking the female Smurfs in hopes of stealing their magic. Just as in the show, Gargamel provides plenty of comic relief for his constant bumbling and arguing with his sly cat Azrael. And while his design does appear as ridiculous as it did in the original cartoon, his voice feels very off. Hank Azaria did a perfect job embodying the character in the previous Smurfs movies, but Rainn Wilson just can’t match that same level of a cackling old that wants to capture blue beings in the forest. This is rather shocking considering how funny Wilson can be, only to be portraying a typically forgettable cartoon voice.

The acting seems to favor the TV series as well with plenty of voices that never stand out. Joe Manganiello is a good choice for the role of the macho Hefty Smurf, so fitting that he shouldn’t be attempting to do a tough guy voice as he is already tough. Jack McBrayer fits the role of Clumsy Smurf well, but never really does much to differentiate this role from his voice of Fix-it Felix in Wreck It-Ralph; close your eyes and you’ll see that character in this voice. And wouldn’t it make sense for singer Demi Lovato in the role of Smurfette to at least sing one of the many songs that crowd the picture?

With the exception of a song included in the soundtrack simply because it has “blue” in the lyrics, there’s nothing offensive or undermining about The Lost Village. The film doesn’t build on anything, especially in how Smurfette never really learns or acquires new abilities on her adventure to find herself, but it never aggravates either. The animation is not too shabby with plenty of good looking scenes where Smurfs ride glow-in-the-dark bunnies and travel down a river that whips through the air. I was even surprised how sparingly the script uses the easy joke of every other word being Smurf used for verbs. It’s about as good as a Smurfs movie can get for trying to respect the original series. The real question is if the series was ever that good to be worth adapting into a movie? I can only hope this adaptation will be enough to satisfy fans and then never be attempted again. One can only take so much of these Smurfing Smurfs for long.