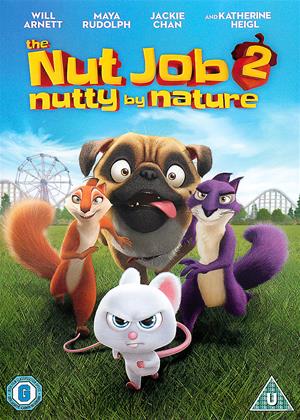 Reviews of The Nut Job 2: Nutty by Nature

The Nut Job was the very definition of milquetoast-animated features. It never fell into the pit of the abysmal as deep as Norm of the North, but it was galaxies away from the brilliance of Inside Out. The animation was never crude, but never memorable or appealing either. The plot was needlessly layered with heisting a nut shop that is a front for a mafia operation. The gags were biodegradable, from thoughtless puns to simplistic fart jokes. If not for the voice talents, it would be doomed to home video. The Nut Job 2 does little to launch out of the ordinary, but still tries to improve. That is, if you consider trading in a fart joke for a puke joke an improvement.

Surly (Will Arnett) has not been growing as a squirrel leader since the previous film. Having bested the mobsters using a nut shop as a front, the park animals now live in luxury with a lifetime supply of nuts. He thinks nothing of the day when the nuts will run out, as opposed to the more long-term strategy of squirrel girl Andie (Katherine Heigl) who wants to continue scavenging and saving food from the park. Since the film doesn’t have time for Surly to learn his lesson when the nuts are all gone, the nut shop must blow up to keep plot on schedule. And since the film doesn’t have time for any meaningful character development or grander themes of survival, a routine plot of an evil mayor wanting to shut down the park comes into play to keep the animation more frenetic. And since the film doesn’t have time to build up any of its characters, you’ll just have to accept whatever half-thought melodrama is staged.

This is a film that desperately needs to slam on the brake in how it speeds past any potential it might have had. The mayor, voiced by Bobby Moynihan, could have been an enjoyable villain, but his southern drawl and money-hungry nature feels like it was ripped from the bargain bin of bad cartoon antagonists. He has a bratty daughter (Isabela Moner) that is just as squandered. And how can you cast Peter Stormare in the role of the exterminator Gunther and not allow him to boast a thick accent of sinister nature?

The returning characters don’t have to build on either. There’s an emotional backstory revealed for how Surly’s mute rat companion Buddy saved his life many years ago, but it’s staged under the pretense that Buddy is in a coma without any dramatic tension of him biting the dust. The pug Precious (Maya Rudolph) forms an unlikely romance with the mayor’s bulldog Frankie (Bobby Cannavale) that is so lacking in chemistry it requires pop music cues to let you know they’re a couple.

I began to perk up a little bit when Surly stumbles into the Chinese section of town and runs across a horde of kung fu mice led by Mr. Feng (Jackie Chan). There’s suddenly a unique character on screen that uses his tail to levitate off the ground, his mouse army to topple cars and a backstory of leading his family out of a demolished park to give him dimension. It’s no surprise why his character was promoted so heavily in the ad campaign. It’s a big surprise, however, why he isn’t introduced in the second act and only then for two sequences when the action finally picks up.

This entire story amounts to explosive battle of destroying an amusement park that has overtaken the park. There are some amusing moments to be sure, but most of them are from Feng’s army that acts so firmly as one they can embody an exterminator’s bodysuit and perform all sorts of body-defying martial arts. Kids certainly won’t be bored by this sequence as its loud, colorful and has small nuggets of decent humor.

But what’s the point of all this? No major lesson is learned about survival or environmentalism, despite how the film attempts to focus on it and then quickly whip away to whatever funny slapstick an animal might be doing. There are no memorable characters, considering I had to brush up on my Nut Job lore to remind myself of what Surly previously accomplished. I won’t remember much from this movie either, aside from being the only theatrical animated film where a dog eats a pile of vomit. I’m sorry to bring that up twice, but so does the movie.