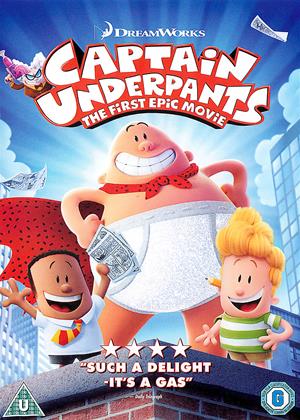 Will enlarge your Hahaguffawchucklealamus - Captain Underpants review by Champ

Prompted by the great review from Mark Kermode, I added Captain Underpants to my list, but wondered how much I'd really enjoy a "kids film". I needn't have worried - this film works for the inner 10-year-old in all of us, and I laughed out loud all the way through. It's a great family film, but great for just adults too.

Plot Spoiler: the Hahaguffawchucklealamus is the part of the brain responsible for laughter, which the evil Professor Poopypants wants to destroy to stop people laughing at his name.

The lads loved it the lasses not so much...... I fell into the lads camp! Great music, funny plotline!!

Kids thought it was great. - Captain Underpants review by AL

Don't want to put parents off. I fell asleep, perhaps I was tired. However the kids seemed to enjoy it, although when I asked them what is was about, they said they didn't know. So I think 3 stars are all I could really rate it.

There’s a simplistic charm to such a juvenile concept of Captain Underpants. He’s a superhero of genius creation by two plucky young grade-schoolers who based him off the cliche of superhero costumes always looking like someone is in their underwear, this one actually being in his underwear. That’s the sophisticated adult answer. The kid reason behind the conception was that it’s funny to see someone in their underpants and to simply say the word underpants. It’s a juvenile idea that comes bundled with the expected farts, toilets and randomness of a child’s lowbrow imagination, but I dare you not to laugh at this picture. In fact, I triple dog dare you.

The concept is innocent enough for the zany speed at which the movie progresses. Best friends George and Harold (Kevin Hart and Thomas Middleditch) have a lively spirit of imagination to their lives. They team up to write their various comic books in their treehouse of marvelous contraptions. What kid wouldn’t want to live next to their best friend, yards connected by a tree house where you can spend the weekends drinking milkshakes while you try to make each other laugh? School does its best depress them, but the duo refuse to be brought down in spirit. They stage elaborate pranks on the teachers to shake the cage and make school a little less dour and stressful for their classmates.

Their antics anger the teeth-gritting principal Krupp (Ed Helms) who is desperate to stop these troublemakers. He’s thankfully dealt with them enough to figure out how to stop their shenanigans: place them in separate classes! What a monster! Fearing their friendship will come to an end when separated by classes, George makes a desperate move to hypnotize the principal with a cheap plastic ring, forged from the mystical factory of cheap toys in China. In the real world, the ring would not work. But since this is a cartoon, the principal can be hypnotized to be a chicken. As the ultimate prank, they convince Krupp that he is their hero Captain Underpants. It’s fun for a laugh at first to see the principal in a cape and underwear, but he becomes a bit of a hassle keep out of danger for a hero that is all-too-eager to fight crime. A man who thinks he can fly and has super strength is bound to get into trouble, outside of the obvious crime for public indecency.

There is thankfully a villain for him to fight: the evil Professor Poopypants (Nick Kroll) is bent on removing humor from the mind so nobody will laugh at his silly name. Why doesn’t he just change his name to prevent the giggling? This is never addressed, but I’m guessing the Poopypants name is from a long line of dignified gentlemen. He’s a classic villain with simplistic origins, but this is the most compelling aspect of Captain Underpants. After suffering through the likes of Cars 3, which little to define its world, and The Boss Baby, which over-explained its world, I can thankfully say that this movie hit the sweet spot for comedy. There’s enough character sympathize and like nearly every character, but never overburdens itself by trying to rationalize its potty humor. I don’t need a detailed reasoning why Poopypants utilizes a giant toilet to destroy a school or why Harold always writes dolphins randomly into his comics.

That being said, adults certainly won’t be bored with the picture as it is still visually creative and slyly amusing. Poopypants becomes a very identifiable antagonist for parents in how he details a child’s brain by quadrants of candy consumption and preference in meals being cheeseburgers and mac & cheese. He also gets some of the best lines, at one point shrinking down the teachers and commenting how their size reflects both their salaries and worth to society. The animation not only accurately reflects the illustrative style of the comics in computer animation, but is also wildly inventive by switching mediums with traditional 2D and sock puppets.

The film is a rare breed of a picture that has just as much heart as it does wacky and juvenile antics. There’s such a playful spirit to its embracement of lowbrow silliness that it takes more effort to condemn its humor than it is to laugh along with it. Kids will adore this picture for its wild imagination and creative use of potty humor. I don’t know how well I can speak for parents, but I was having just as much fun as my daughter with a picture that reminded me of the days of Animaniacs and Hysteria, cartoons that balanced intelligent creativity with smartass hijinks. This film is kid tested, dad approved.