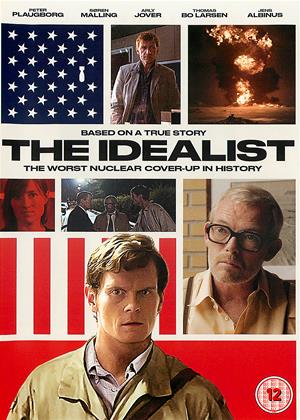 Synopsis:
January 21st 1968 - An American B - 52 bomber carrying nuclear warheads has just crashed on the polar ice caps near the US military Air Base in Danish controlled Thule, Greenland. A few days later, responsible governments classify the crash as a Broken Arrow scenario but proclaims the situation as being under control. Hundreds of Thule workers are set to work, helping in the gigantic clean-up operation. After eight months, all traces of the crashed aircraft and the plutonium-contaminated snow are gone. The case is closed.
18 years on, while covering a local workers compensation story, reporter Poul Brink, suddenly runs into suspicious circumstances linking back to the concealed 68' nuclear accident. Apparently the full and true story about the crash lays well-protected deep under the Thule Bay's ice cap and deep down the classified archives in the US. The ambitious reporter launches an uncompromising investigation. The deeper he goes the further he finds himself in the heart of an International cover-up so immense in size that it holds 2 nations across the Atlantic culpable. Soon those in charge are finding it hard to keep the truth about tragic accident under wraps, and will take any measure to suppress Brink.
Actors:
Peter Plaugborg, Søren Malling, Thomas Bo Larsen, Arly Jover, Tim Ahern, Jens Albinus, Barbara Barnes, Henrik Birch, Claus Bue, Nikolaj Cederholm, Hans Henrik Clemensen, Nikki Donley, Larry Jack Dotson, Ole Dupont, Peter Oliver Hansen, Jesper Hyldegaard, Peer Kaae, Paul Kelleher, Filippa Suenson, Michael Gade Thomsen
Directors:
Christina Rosendahl
Producers:
Jonas Frederiksen, Signe Leick Jensen, Ane Mandrup
Writers:
Lars Andersen, Simon Pasternak, Christina Rosendahl, Birgitte Stærmose
Aka:
Idealisten
Studio:
Arrow Films
Genres:
Thrillers
Countries:
Denmark

Reviews (1) of The Idealist

I found this film fascinating - it's mostly in Danish and all about the issue of a plane carrying nuclear bombs which crashed in Greenland (then part of the Danish Empire, now Greenland - population 20,000 but with oil reserves maybe - is independent and the only country to leave the EU before Britain voted to leave in 2016).

This is based on a true story and set in the early 90s mostly.

The story begins with the issue of workers at a nearby plant then getting ill in the years following the crash. And did all 4 bombs disintegrate as they were designed to do on impact in that plane crash or is one on the seabed?

Oddly, this question is entirely dropped by the end of the movie as the focus moves to whether the Danish PM lied to the people in the late 50s when he said there were no US nuclear bombs in the US military camp in Thule (Greenland - Danish territory then). I wanted to know about whether a bomb was on the seabed in reality but that question was just dropped about two thirds of the way through the film. Very odd.

The lead is great and believable - his sense of urgency against the odds is typical of this sort of Man versus the State movies, but unlike similar Hollywood films, there is no shooting etc. It's all very Danish, I suppose.

Some scenes in Washington and Texas are believable. The fact is, ALL states have secrets and maybe necessarily so.

Sadly, the man on whom the main character (investigative journalist) is based died aged 49 whilst our jogging in 2002 (a caption at the end says) - which proves to me just how dangerous overdoing exercise can be (many macho men die by pushing themselves too hard - and jogging can be fatal if you've just had flu or a bad cold etc). RIP.