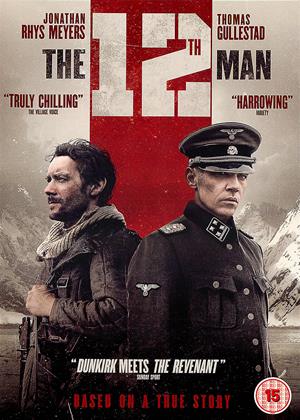 Epic tale of endurance - The 12th Man review by AB

An epic tale about a Norwegian resistance fighter, Jan Baalsrud, desperately trying to escape from the Gestapo after a failed mission. The Arctic conditions are a greater adversary than the Nazis. Jan is close to death many times during his escape. The film is as much about the brave Norwegians who helped him as it is about Jan. The lead actor is tremendous in the role of Jan, Oscar material I believe.

Overall then, an exciting WWII story of heroism and endurance. Mostly in Norwegian, subtitled.

A Hard Look at Wartime - The 12th Man review by KW

A very good film covering one of the many missions that were tried during WW2 to disrupt the Germans in Norway. Based on actual events it clearly shows the extremes of endurance people went through to do their bit for the war effort. The acting of the central character was exceptional and I am surprised that it did not garner a host of acting nominations from the various film awards! If you like the WW2 genre this is a film not to be missed.

Stranger Than Fiction - The 12th Man review by JP

A great, true WWII story. It has a bit too much middle, but the acting and story are wonderful. There were so many heros during the War, and this main character was certainly one of them.

If you like films such as Arctic and The Revenant you’ll like this, based on a true story. In WW2 the last survivor of a 12-man sabotage mission has to cross Arctic Norway to Sweden. He only has one boot, has been shot in the toe and nasty Nazis are after him. There are some terrific scenes. One pays homage to North By North-West as a plane strafes him while he’s skiing across a snowfield and starts an avalanche. Other scenes will make you squirm, especially when he has to amputate a gangrenous toe. The climactic scene is spectacular and barely believable were it not for a caption at the start of the film telling us that ‘the most incredible events are the ones that actually took place’. AVOID THE TRAILER so as not to spoil the surprise (why do they keep putting spoilers in trailers?)

It would be a 5-star film were it not for two problems. At 130 minutes it could do with some pruning. Of course, it’s difficult to cut out characters who actually existed, but our hero’s adventures do become a bit repetitive at times. However, the main problem is the edit. The story is told in flashback, so we know from the start that he will survive and that his 11 companions won’t. This takes the sting out of some of the drama. Even the Nazi attack on the boat carrying the men to Norway is only shown in flashback near the end of the film, so it’s only then that we understand why he only has one boot. Telling the story in linear fashion would add extra drama to it. Nevertheless, this is a film that is both thrilling and amazing.

'The 12th Man' tells the dramatic and amazing story of Jan Baalsrud's escape from the Nazis during World War II. A Norwegian, he was part of a commando sent over to occupied Norway by Britain. Out of 12 men, only 1 survived: Jan Baalsrud. The movie tells his story, as he tries to survive, on the run, and cross into neutral Sweden. The Germans are making huge and persistent efforts to track him down, under the orders of a fanatical Gestapo commander: Jan Baalsrud has become a symbol of Norwegian resistance to the occupiers.

The film shows how he survived thanks to the help he got from Norwegian resistance fighters, but also from ordinary citizens who wanted to help and save him. It is a tale of endurance and survival, but also a depiction of a collective effort: the desire to resist on the part of the locals, against the will to crush them on the part of the Germans.

It is a relentless, yet remarkable film. A must-see. And the landscapes are breathtaking of mineral beauty as well as harshness.

Gripping tale of courage and endurance. - The 12th Man review by BC

This film is an epic story of courage and endurance. The 12th man’, the only survivor from a Norwegian Resistance group, crosses the country  ( in winter), whist being hunted down by the Gestapo.It really is quite thrilling and based on a true story.The Lead actors are wonderfully played.Where were the Oscar nominations for these great actors? Jonathan Rhys Myers plays a Gestapo Commander with chilling conviction.Worth seeing this film for the 2 great Leads.

There is no doubt that the real events behind this film is a remarkable story but unfortunately, whilst it looks great, the film is a plodding affair. It tells the tale of Jan Baalsrud, a Norwegian commando trained by the British who with eleven others attempt to land in occupied Norway in the winter of 1943 with a mission to sabotage German strategic airfields and such. But they are betrayed and only Jan escapes during the German ambush. The film then becomes a long, drawn out survival narrative of Baalsrud, making an attempt to escape to Sweden across the wilderness whilst wounded and frostbitten. Jonathan Rhys Meyers plays the rather clichéd Gestapo officer, with facial duelling scar attached, who attempts to hunt him down. The director, Harald Zwart, adds in various hallucination scenes where Jan is holed up, literally for weeks in some cases, to try and spice up the story but it just ends up making it more prolonged and eventually tedious. A pity because as I say the story is of an astounding feat of bravery but as a cinematic war drama it needed some action.