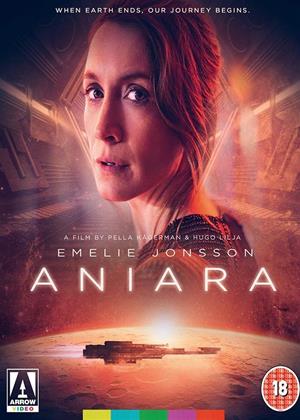 Synopsis:
Fleeing an ecological disaster past the point of no return, what's left of humanity must escape the hell on Earth they've created and fly to the stars. Giant interstellar cruise liners, outfitted with every luxury money can buy, take the human race on a three-week journey to their new home: Mars. On one such space liner, a woman known only as Mimaroben (Emelie Jonsson) assists the passengers as they use MIMA, an advanced Al, to lose themselves in memories of a time when the earth still thrived. Days into their voyage, disaster strikes the ship; debris throws them off course, depletes their fuel and cuts their comms.
As the ship floats aimlessly through space with no sign of rescue, MR holds on to hope as society crumbles around her. She looks past certain doom to find a way to help her fellow survivors live, love and do whatever is necessary to hold on to their humanity. Based on the iconic poem by Swedish Nobel laureate Harry Martinson, 'Aniara' explores the challenges faced by humankind with a deeply compassionate eye.
Actors:
Emilie Jonsson, Bianca Cruzeiro, Arvin Kananian, Anneli Martini, Jennie Silfverhjelm, Emma Broomé, Jamil Drissi, Leon Jiber, Peter Carlberg, Juan Rodriguez, David Nzinga, Dakota Trancher Williams, Otis Castillo Ålhed, Dante Westergårdh, Elin Lilleman Eriksson, Agnes Lundgren, Alexi Carpentieri, Mattias Appelqvist, Unn Dahlman, Laila Ljunggren
Directors:
Pella Kagerman, Hugo Lilja
Producers:
Annika Rogell
Voiced By:
Meghan Lewis, Frank Gerrish, Matt Fowler, Brittany Cox
Writers:
Pella Kagerman, Hugo Lilja, Harry Martinson
Genres:
Drama, Sci-Fi & Fantasy
Countries:
Sweden, Drama, Sci-Fi & Fantasy

The high concept premise of this low budget sci-fi film is that a spaceship ferrying passengers from the dying Earth to a colony on Mars ends up adrift in deep space following an accident that leaves them without fuel. It's a compelling scenario, albeit a rather implausible one - it is never convincingly explained why, in an era of such technological advancement, the ship has no ability to communicate with Earth/Mars/other spaceships after the accident, even though everything else on the extremely hi-tech ship is working perfectly.

If you can take a leap of faith and get past the plausibility of the situation, then it is without doubt rich in potential. With no hope of rescue, the ship essentially becomes a colony in itself and society must adapt to its new way of life. The implications and possibilities of the situation are varied and complex - in truth probably far more complex than any 90 minute film could hope to explore satisfactorily, which turns out to be the case here. What plays out is an episodic narrative full of underdeveloped ideas without any compelling characters to anchor them. It touches on artificial intelligence, consumerism, totalitarianism, the use of political lies to pacify and control the population, religious cults and plenty more besides. Unfortunately these themes are not explored in any depth, and the characters suffer from a similar superficiality. Throw in a crass, tasteless and unnecessary lesbian sex scene (surely conceived of solely for tantalising inclusion in the trailer) and the overriding sense is of filmmakers who probably started out with grand ambitions and good intentions but who sadly lacked the creativity, imagination and discipline to deal with such potent source material (the film is based on an epic Swedish sci-fi poem which I suspect is more successful at exploring the existential possibilities of a human colony drifting through space).

All of which is a shame because it is not entirely without merit. The set design and the special effects are good and they create a convincing environment for the action to take place in. It is ironic that these elements - those most likely to be affected by the evidently low budget - are convincing, whilst the elements that should not be affected by budget - creating interesting characters, developing ideas, basic storytelling - are the ones which ultimately let the film down.

Still think about it - Aniara review by SB

We had no idea what this film was about when we

fired up the projector,  apart from a bizarre bit near the middle of the film( it gets a bit fruity) that would kind of refrain me from recommending it to friends or colleagues ( yep), it was a right good show. We had no idea where it was going and it still pops into my mind now and again, well worth a detour from a Hollywood film.

That’s not to say we don’t love Hollywood films , we love em.

The average happiness quotient of my life has just been reduced several notches. Do not watch this film if you want to be entertained. I'm sure I will remember this film and it does provoke thought but it is clear that the author did not want any positive feelings getting in the way of his message.

How to go nowhere in space - Aniara review by TE

The weakness of this film lies in its sheer implausibility. A civilisation that can travel regularly to Mars and set up colonies there is likely to be able to rescue one of its ships, or at least communicate with it. And life seems to continue pretty much as normal for rather a long time after the ship has lost all its power. Everybody looks suspiciously buff and well fed on a diet of algae.

The strengths lie in its message about the dystopia that the human race seems bent on creating. The ship is, of course, a microcosm of our existing society and the film makers take us through the various stages of our decay.

Maybe the book that Aniara is based on is better...the film doesn't make me want to find out.

For a Swedish film without a Hollywood budget, particularly science-fiction, you must admire the special effects and future-look presented. Presumably a luxury craft transporting people to a new life would look spic and span with clean lines more like some giant shopping mall geared to luxury for people who were heading into an unknown and Martian life. The technology of Mima is slightly mysterious throughout and presumably it some type of organic-based machine that can interact with the human brain but that is left to the viewer and this really is not a problem story-wise.

The acting, as far as I can tell, is good throughout and no hint of the histrionics were are usually treated to in this type of film, especially when ‘disaster’ strikes the control room is quiet calm and trying to figure out what to do. Taking notes Ron ‘shouty arm-waving’ Howard? It was refreshing to see there was tough situation being faced in the ship’s control room without shouting, screaming and foot stamping. Like real life. Clearly the dialogue is in Swedish and I, being the dumb-arsed British person I am can hardly speak English, so I have no idea if the actors were delivering corny lines and overacting but their body language and general demeanour would say not, so I’m going with that view.

Apparently, the film is based entirely on well-known Swedish poem written in 1956 at a time when some people believed we would not even get to the moon let alone protracted space travel or ‘emigration’ to a new world. So it comes as some surprise that a film based on this premise made in 2018 still features conceits in that work. Would the people in charge be fully aware of space debris and plan around that before risking thousands of people’s lives? Would what appeared to be an Allen bolt cause that much damage? Jet passenger planes have three back-ups for every system but a massive passenger carrying space craft does not? How would they survive on algae and where does the water come from? All these questions and others will be answered by someone with more time on their hands and who is more worried about it than me. To fair to Aniara you can do this with every futuristic type story and corners are often cut for expedience and other eminently sensible and budgetary reasons.

What Aniara tries to be about is the human condition and much deeper themes than adventures in space. Take civilised people away from their world, put them in another world that is limited and self-contained. Take away their hope and what happens? Lord of the Flies meets Alien – or something. The entire story is anchored on Jonsson's Mimaroben and it is to her credit that this anchor is strong and firm and keeps you watching. The supporting cast are all strong and believable with no real heroes or villains although Arvin Kananian as the captain Chefone is a near as you get to this but even his character is placed in a very difficult situation and he never goes full on Sir Jasper Naughtybonce.

Existential, challenging, depressing, mesmerising and infuriating Aniara is certainly not your ordinary science-fiction story, in a way you could say it is very Swedish and whilst I can see why some people would find it dull and lacking in an peril or action, why does it have to be I may ask, it strikes me as a film that if you watch it to the conclusion you will not forget it in a hurry.

Save yourself the trouble and avoid this film like the plague. Terrible film shot in a mall made out to be a spaceship with unremarkable characters and utterly nonsensical premise. Don't know what made me include it on my watch list, I suspect cinemaparadiso snuck it on there lol.