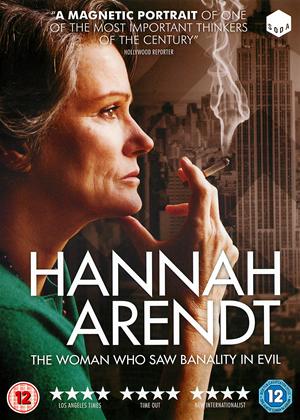 I had to give this film 5 stars, although it probably doesn’t deserve it! I was riveted, trying to take in Hannah’s depth of thought, and for me that made it special and very rare in these days of shallow cinematic wonders.

I had problems trying to catch some of the more interesting or profound statements as they went past me too fast, and I had to rewind to catch them. I also found the jumping from one language to another, and from subtitles to no subtitles, unnecessary and disturbing to my concentration.

It must be said that the film is more like a trailer, tantalising you and inviting you to explore further, (and I did go onto Amazon to search for her books afterwards!) rather than a thorough exploration of Hannah’s character and thought. So many things should have been explored and not glossed over, like her love affair with her tutor Martin Heidegger for example. Did the film maker take on a subject that was beyond him I wonder? I find it curious that the film is called “Hannah Arendt” but in no way is this a biopic. It concentrates on her reporting of the Eichmann trial in Jerusalem, but you don’t really get an in depth look at the trial, her thoughts about it, or her clash with the Jewish community when she published “Eichmann in Jerusalem”. You don’t get to understand what made her tick, or how she became the great thinker that she was. You are left with a vague impression of someone who was a deep and fearless thinker, someone who most people misunderstood, and someone who had sorrows buried somewhere beyond our ken. Yet, the film held my attention the whole time, and as I said, made me want to explore her life and thought further.

At first I struggled to enjoy the film, I have to admit. For me the best bit of the film was towards the end when Hannah gives her lecture and explains about the banality of evil. I rewatched that part several times to really understand her thinking. I enjoyed Barbara Sukowa’s portrayal of Hannah, as she really captured the “ballsy” way this woman reacted to her critics. Very thought provoking and like the previous reviewer, I will read more about this woman.

It's always very difficult to transfer a tale of ideas onto screen, and this one for me doesn't quite succeed in bringing it off - occasionally the dialogue gets to grips with the ethical complexities Arendt confronts us with, but far too often the screenplay simply isn't up to the job, with the result that rather too much of the 'action' feels somewhat stilted. There's some great moments - original footage of Eichmann's trial at the beginning for example is disturbingly compelling - maybe he does 'look like a nobody', but then, what do we expect? A devil with horns? And Barbara Sukowa's performance, particularly in the scenes where she is complemented by Janet McTeeer's Mary McCarthy, is a convincing one. Unfortunately however, Arendt's detractors come across mainly as puppets mouthing a party line, with the result that there isn't really any serious, forensic challenge to Arendt's thought, and the pantomime villain quality of her opponents merely makes the drama less powerful than it should be; an attempt to shoehorn Arendt's affair with Heidegger, moreover, is just a distraction from the film's main concern - the depiction of someone committed to what she considers the truth. So, all in all a worthy subject but not one that does Arendt full justice.

When you start a History degree, as this reviewer did, you are taught to be able to see through bias while also trying to write with the same attention to your own bias. Film’s such as Hannah Arendt, which devote most of its story to the tragic and well known topic of the Holocaust instantly come with that bias but the film follows a character, a real person whose ability to see through horrors and destruction to see the real crimes that took place and how we as a society must transcend them to create a world better than the one our relatives had to endure.

The film follows the true story of Hannah Arendt (Barbara Sukowa), a German jewish philosopher living in Manhattan who decides to attend the trial of nazi war criminal Adolf Eichmann. When she pens a controversial series of articles for The New Yorker about the trial and the revelations it brought she is met with scorn and praise in equal measure, something she must come to terms with moving forward as friends desert her and critics ridicule her.

What you can see right off the bat is that Hannah is an enviable person, a true hero of free thought, she strives to know more and debate with those that disagree. The film shows a view of the Holocaust that is understandably highly controversial yet it never shies away from the tough questions and neither does Hannah. She is courageous in her conviction to truth, to the furthering of intelligent human thought despite her status as a jew.

The films focus is narrow but the film never feels light or empty with the film throwing things at you thick and fast, investing you in Hannah’s problems, her then radical views and her dynamic and endearing personal life. Sukowa brings Arendt’s charismatic personality to life while never turning to impressions, instead choosing to show her idea of the woman, one devoted to her friends but constantly in search of more understanding of the world we live in.

While you may be happy just watching Sukowa dig into the role the film also has a terrific performance by Janet McTeer as Hannah’s close friend and confidant Mary McCarthy, a smart mouthed literary professor whose dedication to her friends equals that of Hannah. Her connection to Hannah humaises the philosopher while giving the film a much needed dose of comedy as she deals with Hannah’s narrow minded critics with spectacular verve.

The film not only works as a history film, a biopic but also as a judgement on the character and impact of religion and how its control over people is sometimes all encompassing. Clever, emotional and inspirational, this is a film you must see.