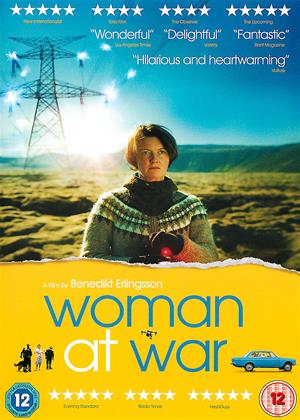 Reviews (8) of Woman at War

Benedikt Erlingsson's film raises some weighty themes but treats them with a very light touch and warm heart. It's basically an environmental drama wrapped in whimsical comedy and tied up with a bow of midlife soul-searching. The package is a little hit-and-miss, but is still very watchable due to to an engaging central performance and a cinematographer, Bergsteinn Bjorgulfsson, whose sweeping shots of frozen heath and lowering Icelandic skies tend to save us from extraneous distractions.

The movie’s heart and spine is Halla (Halldora Geirharosdottir), 50, a sunny choir director and fearless eco-activist. Intent on halting the construction of a new aluminum smelter outside Reykjavik, she sabotages power lines and does (literal) battle with the drones deployed to find her. Her exploits become increasingly daring, and when we see no partner or family other than an identical twin sister (also played by Geirharosdottir), we begin to wonder if her adventures are filling more than just a need to save her homeland, a suspicion strengthened after the arrival of a letter announcing that her application to adopt a child, filed years earlier, has been approved. Yet as Halla teeters between motherhood and vandalism, creation and destruction, her embrace of the natural world intensifies. Often she’s pictured moving through water or clinging to the earth, face buried in gorse and arms flung wide, as if trying to stop her world from spinning, whilst surreal touches, like pop-up musicians only Halla can see, give the movie’s politics a playful, fable-like quality.

There's quite a few implausible plot twists and the adoption sub-plot perhaps doesn't quite work as well as the main 'woman vs world' theme, but generally this is a poignant, intriguing piece of filmmaking.

This is just the sort of film we have joined the C Paradiso to watch, rather than the usual Hollywood blockbusters. It's refreshingly different. It shows an Icelandic landscape, a windblown landscape of glaciers, moss and lichen, and has moments of impossible magical transformation.

Quirky but great - Woman at War review by BB

Loved this film! The ideas, acting, direction - everything. It dealt with very serious issues and dilemmas in a very clever and humorous way.

A little gem! - Woman at War review by DO

This is a truly special foreign language/sub-titled film from Iceland. 100% absorbing. - Woman at War review by DW

Category 12 (no swearing or sexual content) with a fully relevant eco message, this a great opportunity to watch as a family unit.

Credible story line, family bonds on display, make-your-own-mind-up ending, amusing cameo performance from a character who excelled at being in the wrong place at the wrong time, questionably "typical" Iceland music from a non-speaking trio plus songs from another trio in authentic Icelandic garb!

Plenty for a family of 3 or more to discuss, as the closing credits roll by.

The Perfect Movie? - Woman at War review by HO

Can't tell you how much i loved this film! Have even included an exclamation mark. Got a soft spot for Icelandic films but they are usually so bleak as well as brilliant. This is full of humour, as well as some bleakness. Beautiful filming, wonderful characters, redemption, meaning, loads of bureaucratic hypocrites, a yogi, it's got everything. Wonderful stuff.

I enjoyed this. Like all Icelandic films I have seen (all 3 of them maybe) it is off-beat and quirky. OF HORSES AND MEN (2013) sticks in the memory.

I had feared this would be some sort of preachy angry man-bashing feminist lecture of a movie. It isn't.

Instead, this is an interesting, entertaining and well-plotted story told well. Some Hollywood tricks are used to keep the viewer on their toes - the whole reason a cardboard cutout 2-D character (on a bike) even features at all (no spoilers).

I was prepared to suspend my disbelief with both this and the ending because the story is developed well and the main character is believable and sympathetic, however misguided.

What a film - the most unusual, funny and intriguing I have seen in a long time.  The serious theme is sweetened by a wonderful, fearless heroine, a tiny pop-up ‘chamber orchestra’, a trio of Icelandic singing ladies and a stunning and demanding landscape.  If this all sounds too bizarre, it’s not - watch it!  I absolutely loved it and will watch it again with delight.