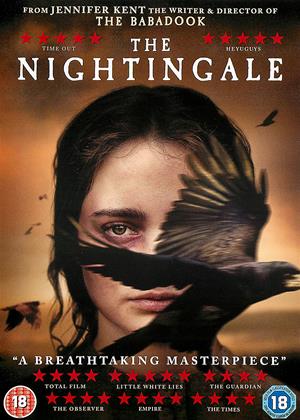 Reviews (9) of The Nightingale

This is not an easy watch. The film is as brutal as the period that is being portrayed, but it is definitely one to watch. Jennifer Kent has made a powerful film, telling an important story.

Jennifer Kent follow up to the babbadook is a really different type of film. This follows the attempt of a young irish girl looking to get revenge on the british soldier who violated her and murderer her family. Aisling is great and believable in the lead role. Sam Claflin and Damon Herriman as the soldiers are the nasty cowardice soldiers and play the parts well.

Not the easiest of films to watch but it's very powerful and emotional.

Excellent but not for sensitive people - The Nightingale review by MB

A very good film that captures you and hold you in its grip like a hurricane. I could not watch it: it took three attempts but glad I persisted.

An epic, bloody journey through the Tasmanian wilderness - The Nightingale review by Philip in Paradiso

The story takes place in the early 19th century (1825) in Tasmania: the 2 lead characters are an Irish girl and a young Aboriginal man that she meets when she is looking for a tracker. The plot is simple, linear and fairly predictable since it is a bloody revenge story: A harms B, and B wants revenge, pursuing A as a result. What is far less predictable is the way that the revenge will be exacted...

The backdrop is the extremely violent colonization of Tasmania by Britain, with soldiers and settlers, as well as convicts, pitted against the native Aboriginal population. Although the notion of genocide has been disputed, what is certain is that, by the end of the so-called Black War (see Wikipedia article), there were no native Tasmanians left: https://en.wikipedia.org/wiki/Black_War

The film is very good because it is not only about violence and retribution. It is also about the rapport between the 2 key characters and how, gradually, it changes and alters. Overall, an excellent and tense movie that you are unlikely to forget.

Unflinchingly Meditation on Violence - The Nightingale review by BG

SPOILERS... In Tasmania, 1825, former Irish convict and now servant Claire (a superb Aisling Franciosi) is raped by British soldiers, her husband and baby murdered, so enlisting aborigine tracker, Billy, she persues them through the wilderness to seek bloody revenge. During the journey there are gradual transitions. At first Claire is demented with rage (naturally) and savagely kills one of the soldiers, but as her nightmares increase, she seems to lose a grip on reality as well as her blood-lust. Her negativity towards Billy decreases as they strike up a bond; him realising that she is justified seeking revenge, and she begins to sympathise with his plight of prejudice against his people. As further atrocities occur against the aborigines, roles are reversed, and now it is Billy who is after revenge.

An angry film from the director of THE BABADOOK, and you're going to HATE these officers, longing for their comeuppance. This powerful film has a poignant ending as Billy, gutshot, sits by the shoreline watching the sunrise as Claire sings an Irish song... like a "nightingale". This story could have easily been a Western, with Indians substituted for aborigines.

Predictable but enjoyable - The Nightingale review by LC

Of all the film genre, the revenge drama is probably the most predictable: a group of evildoers commits a terrible crime against the hero (or their loved ones) - the hero then spends the rest of the movie tracking them down and exacting bloody justice. That said, whilst 'The Nightingale' doesn't really subvert the genre, it's one of the better examples of the form, with a good cast and interesting setting. The addition of a second 'wronged person' in the form of the native guide also adds a nice wrinkle, allowing the film to examine racial as well as sexual prejudices, and adding another layer to the story.

Difficult to watch, but worth the effort. - The Nightingale review by LT

A dark but gripping storyline, it pulls no punches in its account of some of what went on in that period of time. All the actors involved play their parts well, their performances, for good or evil, keep you gripped throughout.

Tries to do too much? - The Nightingale review by PD

Mmm .......... writer-director Jennifer Kent wants to rage against historical injustice here, but unfortunately it all falls a bit flat, perhaps as a result of wanting to do too much.

Set in colonial Australia / Tasmania, it's laid on on with a trowel that the English use Irish prisoners as slaves and “civilise” the native population by exterminating them ... mmm .... and Aisling Franciosi as revenge-seeking Clare, is, I'm afraid, not very convincing (we're obviously on her side, but I wouldn't bet on her to ride a horse for 20 paces, let alone shoot anyone). And then just when you think it might build up to something important it builds up to a ridiculous (and bafflingly male-centred given the appealing 'feminist' premise) ending.

The important theme of the sordid history of English colonialism is unfortunately packed into one cartoonish character, and this has the effect of leaving us with little to think about. So, in the meandering last half hour (we're kept for over 2 hours, and it felt like it) any power that some scenes have had (and there are many) is dissipated in a truly awful melodramatic, cliched finale. So all in all a bit of a disappointment from a fine director.

Subtitles - The Nightingale review by CM

There are no subtitles, except for the bits in languages other than English.

It is a good film, worth watching, if difficult.