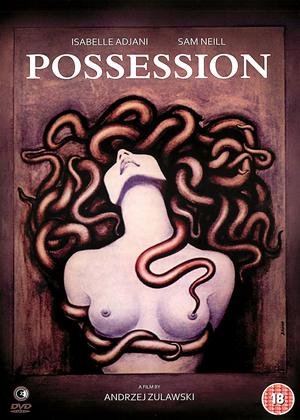 The marriage between Mark (Sam Neill) and his French wife Anna (Isabelle Adjani) is crumbling. Anna is having an open affair with Heinrich (Heinz Bennent), blaming Mark’s elongated time spent away for his work (an undisclosed spying mission he is trying to walk away from). Their unfortunate child, and the most stable character, is Bob (Michael Hogben), caught between the increasing madness and paranoia of his drifting parents. It’s apparent that the child’s presence keeps Mark and Anna more grounded than would otherwise be the case, for when he is out playing, or at school, increasingly violent hysteria ensues.

Through a private investigator, Mark discovers his wife has a second apartment in the rundown side of town. When the investigator discovers a slimy, living organism in the apartment, Anna glasses him. Events spiral further into rich absurdity and madness and with that, ‘Possession’ lurches confidently into uncategorisable territory. It is also the most enjoyable and refreshing horror film I have seen in a long time.

Conversations are replaced with intense dramatic exchanges involving characters forever at the end of their tether, frenzied even from the outset. The direction comprises of shots that give the actors space to do their thing, and what intense performances are unleashed! Often shot in cool blue colours, this was filmed entirely on location in cinematically drizzly Berlin.

Director Andrzej Zulawski wrote this whilst going through a divorce, which might well have contributed to the fraught emotions exhibited by the characters.

Each time we see the organism, it increasingly exhibits human shape until ultimately, it assumes Mark’s appearance (as well as the sexual attentions of Anna). In a bid to outdo even its own outlandishness, I feel the ending is ultimately slightly disappointing – however it cannot be easy to bring a satisfying closure to such an outlandish and shocking series of events.

Meeting with disappointing sales on its release, ‘Possession’ was banned by the usual feint UK hearts as a ‘video nasty’ yet has assumed cult status. It also won Isabelle Adjani multiple awards for best actress for her astonishing performance. As it is, every performance is astonishing, from Bennent’s passionate portrayal of the flamboyant Heinrich, to juvenile’s Hogben’s commendable playing of Bob.

I Can't believe that for nearly thirty nine years I have been missing out on this brilliant movie, I knew of it but just never got round to seeing it. Now thanks to Cinema Paradiso I have just witnessed one of the most mind blowing movie experiences ever. Utterlly compelling, disturbing and shocking, this had me watching open mouthed from beginning to end and it's a very long time since a movie has had that effect on me. Isabelle Adjani's perfomance will leave you shell shocked and surely must go down in cinema history as one of the greatest portrayals of a woman breaking apart ever. A big thank you must also go to the distributor for releasing a beautiful uncut print.

An ever-escalating and increasingly deranged dance macabre of long tracking shots, domestic menace and madness both marital and monstrous.