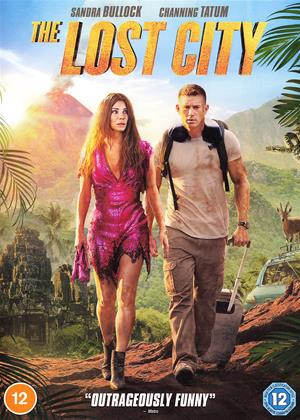 Reviews (1) of The Lost City

Judging by the reviews and the fact that i like sandra bullock i thought this might be fun.

But its a pretty dull re tread of romancing the stone.

Its not funny exciting original or likeable.

Yeah, okay, let’s say it right out of the gate: The Lost City is pretty much Romancing the Stone. It’s the story of an author who finds herself engrossed in writing romance and adventure only to be thrown into a real-world case of romance and adventure. If that alone turns you off, then peace out. But much like romantic comedies and procedural detective tales, its the journey not the destination. We know that our hero will find that elusive treasure, outsmart the bad guy, and get the guy in the end. What matters more are if the characters can sell you on this familiar story yet again. The answer: Kinda.

The casting is spot-on at least. Sandra Bullock plays the romance author Loretta Sage, bitter and weary about meeting deadlines of mindless dreck. She tries to inject some smarts into her books but few take notice. It’s why her latest book, The Lost City of D, immediately makes everyone think the D stands for dick even though it relates more to a lost tribe of the tomb explored in the book. But could you blame the women salivating over these books for such a mistake? After all, all the book covers feature the returning male lead portrayed by Alan Caprison, a dumb model played by Channing Tatum. He mostly lavishes in the fame while Loretta grits her teeth to force a smile for her public.

The antagonist of the film is the billionaire Abigail Fairfax, a name that you better believe such a film would use for mockery of a guy having a girl’s name. He’s played by Daniel Radcliffe who seems to be getting better used to these rich villain types after his role in Now You See Me 2. He seeks a lost civilization and only Loretta can help him find it. So when she refuses, he kidnaps her. When Alan realizes Loretta is in danger, he tries to come to her rescue but isn’t very skilled at being the muscle-bound adventurer of Loretta’s books. This leads to a lot of silly antics and a bit of romance along the way.

Bullock and Tatum have a decent dynamic as fishes clearly out of water. Despite being bound by some improv, they mostly fair well with the material. It’s fun hearing Bullock’s passive commentary on situations and Tatum trying and failing to look heroic. One of the funniest sequences features Tatum struggling to get leeches off his body and Bullock trying not to comment on his penis. It’s a seem that appears standardly silly but both actors do alright with the banter. There are also some strong supporting comedic talents. Brad Pitt appears as a mercenary who is posed as the cunning and capable adventurer with great absurdity. Loretta’s publisher Beth is perfectly played by an eccentric Da'Vine Joy Randolph, going above and beyond to get back her talent but not above complaining about it. Props to Oscar Nunez for making the most of his role as the eccentric pilot, having a fine dinner with the few lines he is given.

The Lost City won’t win over anybody who doesn’t feel like engaging in a retread of Romancing the Stone. But if you like those types of movies and wanna see an adventure film that is less guy-oriented and more absurd with its parody of romance, this film mostly gets the job done.