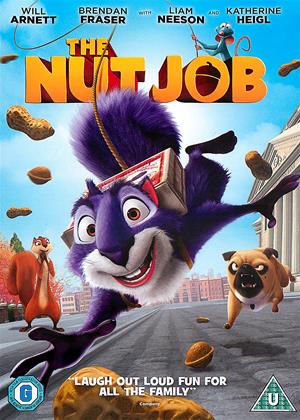 I enjoyed this film but I probably wouldn't watch it again, the story for me didn't keep me interested in it enough. Great animation let down by a weak story. Still ok for all the family.

While it’s easy to let a film slide when its a fun loving animation, something that makes children smile and adults can sit through without that much pain, it’s another thing entirely to sit through a film like The Nut Job, an animation almost as bad as Planes as it steals everything that worked about Free Birds and other animal related animations and transformed those elements into something unpleasant and more importantly wrong.

The Nut Job follows the antics of selfish squirrel Surly (Will Arnett) and his attempts to get as much food as he possibly can for himself. When his actions inadvertently cause huge problems for the squirrel community when they food stores are destroyed Surly is banished and must find a way to return bringing him to a dangerous heist that could fix all his problems but the bank robbers using the store for their robbery might have something to say about his plan.

Filled with famous voices taking over thankless, uninvolving roles it’s hard to imagine a single one deciding to take part in The Nut Job on purely artistic levels. Arnett is his usual zany self but Surly is an unpleasant character, a kind of faux charming schmuck that really shouldn’t be glorified in film. The film aims for over the top antics to distract from the complete lack of a story to this bargain bucket caper as animals come to life in weird and unexpected ways but to no decent conclusion, they just do silly things because the film demands it

The Nut Job doesn’t quite scream cash grab in the same way Disney’s Planes did but it doesn’t feel that director Peter Lepeniotis made this feature with pride and conviction making the whole film seem pointless, effectively sapping any sense of purpose from the film and leaving you with an unpleasant squirrel trying to prove he isn’t exactly who he is.