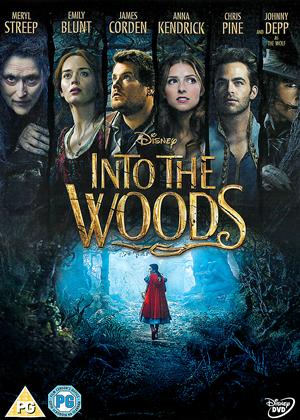 Reviews (6) of Into the Woods

Confusing - Into the Woods review by IL

My mistake in renting this film did not realise it was a musical, even so I carried on watching but gave up after half hour. If you like musicals I suppose it's ok but I'm afraid I couldn't get into it.

As modern musicals go, and let's face it nothing compares to Rogers and Hammerstein this is a good effort but why oh why didn't it finish at the 'happy ending' point? Instead Disney decided to add a completely unnecessary 30 odd minutes on to the film which puts a total dampener on things. Watch, enjoy and stop and eject at the marriage scene and you will have a lovely family fun movie.,

annoying - Into the Woods review by wm

OMG how long did the opening song last? It was like a duracell battery it went on and on then just when you thought it was over and they were in the woods it started again so hence to say that was the end of the film for me what a shame because i think i might have enjoyed ithad they not dragged it out.

INTO THE WOODS ....WITH A SHOVEL TO DO A BIG OLD PLOP ! - Into the Woods review by porky

I Couldn't even watch this to the end, im afraid to say it was Painful Viewing ,and I am still suffering the Tummy Ache and Loose Stools a day later .

I Love a bit of Fantasy, and dont mind a Musical now and again...THIS MONSTROSITY not only had the WORST Music / Songs but the Casting was Hideous, had i realised the Ghastly James Corden was in almost Every Scene I would NEVER have allowed it into my Home !!!

..not to mention the deeply untalented Tracey Ullman and the Horrific Over Acting Johnny Depp.

Ive sadly Nothing Kind to say about this movie. its left me feeling Very unwell. Deeply agitated and Diabetic in the worst way imaginable .

Very annoying musical fairytale romp with NOT ONE memorable song! - Into the Woods review by PV

Firstly, let me say the main reason I disliked this movie was that it was based on a musical by Stephen Sondheim who is world famous for managing to write very many musicals without including a memorable hit song in any of them (well, except 'Send in the Clowns').

In this, the whole movie is played with that singing-speaking voice - as in the similarly annoying Les Miserables (though that at least has a memorable song in it). I CANNOT STAND modern musicals like this - listen to GREAT musicals by the Sherman Brothers (Mary Poppins + many others) or Rogers and Hart and see just how much musical theatre has declined in recent decades. There MUST by hummable songs in a musical. Otherwise, why bother?

As someone else has said, there is also an extraneous and unnecessary 30 minutes on the end of this film - this has become common in Hollywood movies - in fact it's practically a cliché now. LONG 2 hour plus movies with a 'false' happy ending half an hour from the end, then some post-modern tricksy guff dragging the whole thing out. This film should have ended 30 minutes before it did.

Having said all that, the intertwining of fairy tales is impressive and well-plotted (esp the original version of Cinderella where the sisters get their feet chopped off to fit the slipper, and where birds peck their eyes out) is used here. Some old British character actors like Frances De La Tour appear, as does the ever-watchable Johnny Depp and Meryl Streep. All this stuff is good. The film does not shy away from death or characters dying either - refreshing in a children's/family movie.

The best song is probably the 'it's your fault' song which raised a laugh (SO TRUE TO LIFE!) and there were a couple of other laugh out loud moments too.

But the music is JUST not good enough or strong enough. I can see children being very bored by a lot of this too.

The music gets NO stars.

The acting, story and SFX get 2.

Worth watching on a wet afternoon, but prepare to be annoyed and only occasionally entertained!

Absolutely Awful - Into the Woods review by CS

I am not a musical fan but even so the music was turgid and unmemorable. What a waste of such talented actors. The story is a mish-mash of nursery rhymes and fairy tales painfully woven into one story. I barely managed to sit through it.

Into the Woods review by Michelle Sommerville - Cinema Paradiso

Into the Woods is another Hollywood attempt to revive the classics and make it attractive to modern audiences. Normally this wouldn’t be a criticism, but in this instance, it certainly is. I give it two out of five stars, because while I have seen films that were much worse, I wouldn’t watch this film more than once.

The film follows a young baker and his wife, who appeal to a witch to allow them to have a baby. The witch agrees to lift the curse in place, but only if they go on an adventure to bring back four key items; each from a different common fairytale. However, even procuring these items doesn’t give them a happily ever after, and everyone must find what they really want in life.

It is becoming more and more clear that Hollywood are out of film ideas, and are content to remake any old story and slap once-popular actors in it. I’m not saying every instance of this has been cringeworthy, but this one certainly was.

The musical element wasn’t too bad, but, again, I think they fell way short of what they wanted to achieve. It did, however, manage to strike a good content and theme balance so it would be appealing to children and their parents/guardians.

One positive thing I can say, is that I did like the creative combining of the classic tales.

This film boasts a lot of well-known actors, yet they couldn’t make this film interesting. To me, they are almost all overrated, and their names being attached to the project is probably the only thing that got it made. Into the Woods features Meryl Streep, Emily Blunt, Anna Kendrick, Chris Pine, among many others. But, perhaps the most overrated, is one Johnny Depp. While once a respectable actor, he is now popular for being popular, and a lot of his roles could have been better cast.

The effects were probably the main attraction of this film. Effects were near flawless, but even this sometimes became distracting, with too much going on.

Critic and audience reviews have been quite average. It has received more positive reviews than I thought it would, but there must have been a good reason why it took so long to get this film’s production off the ground.

Overall, while this film isn’t the worst you can see, there are a lot of other films I would recommend over this one. Two out of five stars, and I hope Johnny Depp realises soon that he doesn’t need to be in every film.