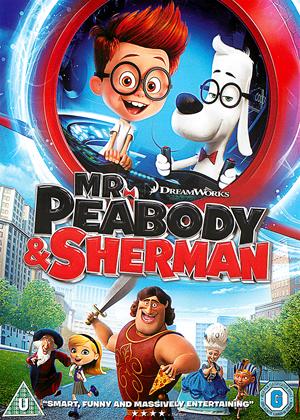 Reviews (1) of Mr. Peabody and Sherman

All the best animations take advantage of the films quieter moments to help you connect to its characters, either through light hearted comedic moments or a shocking emotional revelation. Mr Peabody and Sherman unlike most animated comedies never for a second calms down, its pace is always frenetic but for some bizarre reason you still care about Peabody and his human sidekick.

The film follows Mr Peabody (Ty Burrell), a hyper intelligent talking dog who has won every award that you can think of. His next journey is raising a human boy and he adopts Sherman (Max Charles) but when Sherman gets into trouble at school and bites his classmate Penny (Ariel Winter) Peabody finds he might lose Sherman because of it. However on a much more dangerous aside it might all mean nothing if Peabody, Sherman and Penny cannot reverse the damage they have done using Peabody’s most prized invention, The Wayback, Peabody’s very own time machine.

The charm of Mr Peabody and Sherman isn’t its story or its message of surrogate families, they are things any film fan would have seen before from many different films, the charm comes from the films comedy and ability to defy conventional pacing while still telling a thrilling story. The film flies by without you really noticing and features some exceptional comedy moments that take advantage of all the time periods that the group travels to.

The film is a treat from beginning to end with not a single scene feeling out of place or irrelevant in the whole picture. That being said the film couldn’t work without the vocal performance of Burrell who embodies Peabody’s quirks and unusual pacing with such glee and passion that he turns the smartest dog in existence into a truly riveting character and a father any boy would love to have, if only to visit ancient Egypt every once in a while.